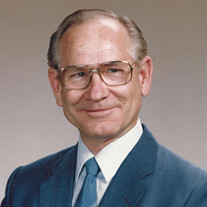 Graveside services for Rev. Arlie Teske, Sr., 90, formerly of Enid, will be Tuesday, October 22, 2019 at 2:00 pm in Memorial Park Cemetery Mausoleum Chapel with Pastor Josh Cosby and Arlie Teske, Jr., officiating. Arrangements are by Anderson-Burris Funeral Home. Arlie was born on January 22, 1929 in Taloga, Oklahoma to George and Ada Koehn Teske and passed away on October 18, 2019 at his home in Oklahoma City. He grew up in Washington and Oklahoma and graduated from Enid High School in 1947. Arlie graduated from Southwestern Assemblies of God College, Waxahachie, Texas. In June 1958, he married Jennie Scott in Canton and they made their home in Southard. They became missionaries in Korea in 1965. They retired in 1996, and made their home in Enid. He was a member of Central Assembly of God Church and was a leader for Royal Rangers. Arlie served as pastor for Assembly of God, Pond Creek for several years. Arlie was preceded in death by his beloved wife, Jennie on July 24, 2019; infant daughter, Patricia Ann; son-in-law, Bryan Vaughn. He is survived by his children, Arlie Teske, Jr. (Denise) of Oklahoma City, Rebecca Vaughn (Joel) of Stafford, Virginia, and Freida Vaughn of Hugo, Oklahoma; 12 grandchildren, 6 great grandchildren; brother, Ervan Teske of Enid; sisters, Iona Green and Arlene Teske, both of Enid; nieces, nephews and friends. Memorials may be made through the funeral home to Central Assembly of God-Missions.

The family of Arlie Eldon Teske Sr. created this Life Tributes page to make it easy to share your memories.

Send flowers to the Teske family.