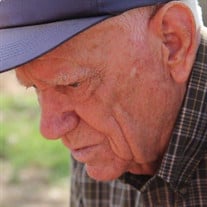 Celebration of life for Billy Dude McClure, age 89 of Enid, will be 10:00 AM Monday, April 1, 2019, at Garriott Road Church of Christ with Ray Rose and Ryan McClure officiating. Burial will be at 3:00 PM in Gotebo Cemetery. Arrangements are by Anderson-Burris Funeral Home & Crematory. Billy Dude McClure was born on December 23, 1929 north of Gotebo, Oklahoma to Charlie Leander McClure and Willie (Haley) McClure and passed from this life on March 28, 2019 in Enid Oklahoma. Bill graduated from Lake Valley High School in 1948 and attended business college. He worked for the Oklahoma State Highway Department and later opened TV Center Sales and Service in Mt. View Oklahoma, finishing his career working for TV Cable Systems in Texas, Colorado and Cordell, OK before retiring in 1995. Bill was united in marriage to Vaunita Teel, on December 31, 1950 in Mtn. View, Oklahoma. Born to this union was a daughter, Diane and a son, Larry. Vaunita passed away in 1997. Bill was married to Irene Dool in 1999 in Cordell. They resided in Cordell until moving to Enid to be near family in 2013. Bill was a master gardener. He had planted a garden every year since he was 11 years old except for the two years they lived in Colorado. After he and Irene moved to the Commons in 2017 he cared for the flowers on the patio. Bill is survived by his wife Irene of the home; daughter, Diane Dees and husband Don, Enid OK; son Larry McClure and wife Kathy, Fairview OK; one sister, Shirley Mason and husband, Marland, Enid OK; Irene’s children, Connie Toby of Oklahoma City, and Keith and Amber Coleman of Oklahoma City. Granddaughters, Kenya Olson and husband Clint, Waynoka, Dacia Redgate and husband Ryan, Waynoka; Kourtney Keeton and husband Nathan, Fairview, OK; Grandsons, Rance Meier and fiancé Julie Miller, Piedmont, OK; Ryan McClure and wife Caitlin, Norman, OK. Bill was blessed with 13 Great Grandchildren whom he adored; two nieces and two nephews and a host of other family and friends. Bill was preceded in death by his parents; wife, Vaunita; sister, Wilma Watkins and Great Grandson, Jace Ashby Keeton. Bill was a faithful Christian all of his life, serving as an Elder in the Church at Mtn. View, Oklahoma and Cordell, Oklahoma and had been a member of the Garriott Road Church of Christ since moving to Enid.

Celebration of life for Billy Dude McClure, age 89 of Enid, will be 10:00 AM Monday, April 1, 2019, at Garriott Road Church of Christ with Ray Rose and Ryan McClure officiating. Burial will be at 3:00 PM in Gotebo Cemetery. Arrangements are... View Obituary & Service Information

The family of Billy Dude McClure created this Life Tributes page to make it easy to share your memories.

Celebration of life for Billy Dude McClure, age 89 of Enid, will...

Send flowers to the McClure family.