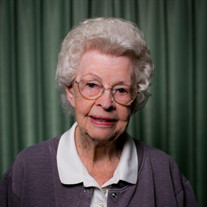 Bonnie Lee (Hagen) Graves, 97, of Enid, passed away Thursday, June 11, 2020 at her home. She was born to Olaf and Sigrid Hagen on January 4, 1923 in Hot Springs, South Dakota. Bonnie attended elementary and high school in Hot Springs and graduated from there in 1941. She loved the Black Hills of South Dakota. Bonnie met the love of her life, Donald LeRoy Graves at the University of South Dakota, and they were married September 18, 1944 in Vermillion SD, enjoying 72 years together. After their wedding, they moved to New York City where Bonnie worked at Sheltering Arms Children Services placing children in foster homes while Don attended New York Medical College. While Don served in the Navy, Bonnie held various civilian jobs: the US Naval Hospital, patient personnel office in Farragut ID; the United Methodist Church, San Diego CA; typist for the County Superintendent of Schools, San Diego. After military service they moved to Kentucky and served in the community of Homeplace, then moved to Frenchburg. Bonnie worked at the Menifee County Drug Store as a pharmacy assistant, and was involved in Girls Scouts, 4-H Clubs, and the Presbyterian Church. She was a member of Beta Sigma Phi. The choices Bonnie made in her life were based on her commitment to Christ, her love for her family, and her service to others. Her commitment to Christ was unwavering. Even during the hard, difficult times of life, she trusted in Him. She read her Bible faithfully and was an avid prayer warrior for her family and others. She enjoyed teaching Sunday School, Vacation Bible School, and served on several mission trips to other countries. Bonnie’s most treasured job was a wife to Don and a wonderful mother to five children. Motherhood began when Bonnie and Don made the decision to adopt a baby boy, and love him as their own. Before son Steve’s adoption was final, they learned they were expecting a baby, but this did not change their decision to continue with his adoption. Four more children would join the family, and in her words, “a family which I truly love.” She was actively involved in her children’s school activities, supporting them in their many projects and endeavors. Bonnie was a lifelong bookkeeper for her husband Dr. Donald Graves MD. Bonnie loved being involved in the communities where she served. She commented “No matter where a person lives, it is the people who enrich our lives and make each place special.” In Kentucky after WW II, many families were poor because the men had gone to serve in the military. Bonnie often accompanied her husband to a home deliveries. After a home delivery the doctor was usually served a chicken dinner. She felt guilty eating the food when the family needed it, but this was the family’s way of paying the doctor in most cases. In 1971 they moved to Wakita, OK, and she loved the new relationships that she formed. She was involved in PEO, Wakita CHC Women’s Auxiliary, and Wakita United Methodist Church. In her later years at Golden Oaks Retirement Community, she loved watching birds and working in her flower beds. Bonnie was preceded in death by her husband, parents, brothers Art Hagen and Harry Hagen; sisters-in-law Ruth Hagen, Gussie Hagen, and Dolores Hagen. She is survived by five children: son Steve and Sue Graves of West Chester, PA; daughter Donella and Bill Young of Medical Lake, WA; son Charles and Karen Graves of Woodward OK; daughter Connie Wolcott of Lubbock, TX; daughter Paula and Doug Unruh of Newton, KS; 16 grandchildren and spouses, 26 great-grandchildren and 3 on the way; many extended family. Memorial service will be Wednesday, June 17 at 4:00pm, Wakita United Methodist Church, Wakita, OK. Memorials may be made through the funeral home to Wakita Community Health Center or Wakita United Methodist Church.

Bonnie Lee (Hagen) Graves, 97, of Enid, passed away Thursday, June 11, 2020 at her home. She was born to Olaf and Sigrid Hagen on January 4, 1923 in Hot Springs, South Dakota. Bonnie attended elementary and high school in Hot Springs and graduated... View Obituary & Service Information

The family of Bonnie Lee Graves created this Life Tributes page to make it easy to share your memories.

Send flowers to the Graves family.