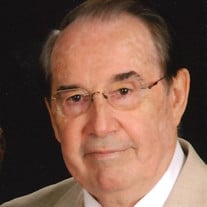 A Celebration of life service for Charles J. “Jerry” Briggs, 86, of Enid will be 2:00 pm Thursday, June 6, 2019, at the Anderson-Burris Funeral Home Chapel with the Rev. Josh Cosby Pastor officiating. Cremation and arrangements are under the direction of Anderson-Burris Funeral Home & Crematory. Jerry was born August 1, 1932 in Muskogee, to Eddie J. and Wynema Briggs, and passed away to His Heavenly Home on Saturday, May 18, 2019, in Enid. He grew up in Muskogee, a graduate of Muskogee Central High School, then entered junior college for six months. He joined the Navy, after boot camp. He attended Hospital Corps School in Portsmouth, Virginia, to Camp Lejune, N.C., then to Camp Pendleton, CA for field combat training. He shipped out from Camp Pendleton with the First Marine Division, Third Battalion, to Korea as a medic with George Company, a combat infantry co. for sixteen months. One occupation in combat, he received the Medal of Commendation with the Combat “V”. He was so proud to wear the Marine uniform for his country. Jerry married Lydia Ann Boone in July 1951, and of this union, were three children; Janice, Sherri, and Steve. He married Shirley M. Hess in May of 1989, and later married Virginia M. Barnes on February 1, 2003. He was a member of the Baptist Church most of his life, and presently was a member of the Central Assembly of God. Jerry loved the Lord, and put all his trust and faith in Jesus Christ as his Lord and Savior. Church and Sunday School were his high light for the week. He enjoyed golfing, hunting, fishing, and his motorcycles. His love for horticulture began when in Louisiana, where he attended LSU, receiving his degree as a licensed horticulturist. He worked for F.W. Woolworth Co., as a manager trainee for four years. Then with T.G.& Y. stores as manager, coming to Enid in 1961, and then into supervisor of stores in Oklahoma and Kansas. He is survived by his loving wife Virginia, one daughter, Sherri Stetnish and husband James of Noblesville, IN, one son, Steve Briggs and wife Cheryl of Enid, three step-daughters, Christi Deroin of Enid, Becky Barnes and husband Marty of Oklahoma City, and Sherri Blalock and husband Mike of Joplin, MO, seven grandchildren, eleven great-grandchildren, one great-great-grandchild, three step-grandchildren, three step-great-grandchildren, and a brother, Ollie Briggs and wife Ann. He was preceded in death by his parents, two wives, daughter, Janice Kay Pettyjohn, step-grandson, Tyler Barnes, and a brother and sister-in-law, Don Briggs and wife Gerdell. Memorials may be made through the funeral home to Gideons International.

The family of Charles Jerome "Jerry" Briggs created this Life Tributes page to make it easy to share your memories.

A Celebration of life service for Charles J. “Jerry” Briggs,...

Send flowers to the Briggs family.