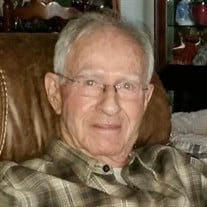 Charles Eugene Slough (“Gene”), 98, died on September 21, 2021 at Greenbriar Nursing Home in Enid, OK. He was born on July 15, 1923 to Elena Rodenbaugh and Charles Leroy Slough in Jeffersonville, Pennsylvania. Gene attended Boise Junior College where he earned an AA degree then went on to take classes towards a Bachelor’s degree at the University of Chicago, but was called into service before he could complete it. In 1961, he married Penelope Nesta Weadock. They were divorced in 1973. They had no children. A career serviceman, Gene was a veteran of World War II, Korea, and Vietnam. He first served in the Army Air Corps from 1941 to 1945 and reenlisted in the Air Force Reserve in 1952. Except for the period between the two service branches, he remained in the military until his retirement on October 1, 1968, after 20 years of service. During World War II, Gene saw a great deal of combat activity. Stationed in Southern Germany and serving as a tail gunner in B24 Bombers, he flew 35 combat sorties over Italy, Romania, Hungary, and Germany. After reenlisting in the Air Force Reserve, he was called up during the Korean War, but did not serve in Korea. During Vietnam, however, he was stationed in Saigon and then in Da Nang for the rest of the war. He was later trained as medical photographer in Japan. Upon retirement from military service, Gene moved to Canada where he worked as a clerk in a law office. While visiting his mother in New Jersey, he noticed two helicopters in front of the Cape May County Mosquito Commission. Thinking they might need a photographer, he applied, was offered a job. After 12 years working in the wetlands of the Jersey Shore, he retired a second time. Gene discovered Enid in the process of buying a rifle from Champlin Firearms. He visited Enid a number of times and liked the town more and more each time. In the end, he decided to make Enid his home. Gene is survived by his nephew, Raymond Allen, of Baltimore, Maryland, and two great nephews, Bree Allen and Wyatt Allen, each of whom has two children. A memorial service will be held on Wednesday September 29, at 2:00 pm at Anderson-Burris Funeral Home, 3002 N. Van Buren St., Enid, OK. 35 combat sorties in Italy, Rumania, Germany tail gunner; Technical sergeant; Voluntary retirement Sept 1968 Reenlisted April 1952; Discharged 1954; Discharged 1960; Discharged 1964 Air Medal with 4 Bronze Oak Leaf Cluster; Presidential Unit Citation; Good Conduct Medal w/3 Bronze Loops American Defense Service Medal; Air Force Good Conduct Medal w/ 1 Bronze Leaf Cluster World War II Victory Medal; European-African-Middle Eastern Campaign Medal American Campaign Medal; National Defense Service Medal w/1 bronze service star Vietnam Service Medal;Air Force Longevity Service Award Ribbon with 2 Bronze Oak Leaf Clusters; Reenlisted for 5 years on Aug 4, 1964

The family of Charles Eugene "Gene" Slough created this Life Tributes page to make it easy to share your memories.

Send flowers to the Slough family.