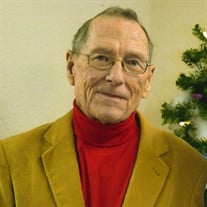 Charlie Dean Strohmeyer, 84 of Enid, was born May 2, 1936 in Waynoka and passed away peacefully after a brief illness on May 3, 2020 at home surrounded by his wife and children. Charlie was better known as “Chuck” or “Sonny” to family and friends. Visitation will be held on Friday, May 8 and Saturday, May 9 from 8 am to 6 pm at Anderson-Burris Funeral Home and Crematory in Enid. A memorial service will be held at a later date due to COVID-19. After graduating from Waynoka High School, Chuck enlisted in the U.S. Air Force as a C-130 aircraft mechanic. He returned home as soon as he could to marry the love of his life, Kathleen Combrink, in Garber on May 31, 1957. Together they had a son, Shawn, and a daughter, Cristy. The Air Force provided many travel opportunities to places such as Tennessee, Texas, Taiwan, and a four year tour in Japan. After a 22 year career, he retired as a Senior Master Sergeant Vehicle Maintenance Superintendent and then moved the family back home to Oklahoma, settling in Enid. He worked briefly for Northcutt Chevrolet before beginning a new career with the U.S. Post Office as a mail carrier and then a distribution clerk. He chose to work nights so he could golf by day. Chuck and Kathy joined Liberty Southern Baptist Church where Chuck was a loyal servant of the church for many years. He retired a second time in 2001 so he could dedicate even more time on the golf course and more time at church where he was known for greeting visitors and members with big hugs and telling his infamous jokes on family nights. Chuck was preceded in death by his parents, Maunt and Poiteaux Strohmeyer of Waynoka and a grandson, SSGT Chad Strohmeyer of Broken Arrow. He is survived by his wife of nearly 63 years, Kathleen; son Shawn (Carla) of Big Cedar, Oklahoma; daughter Cristy King (Doug) of Greenville, Indiana; grandchildren Shay Strohmeyer of Tulsa, Wylie King and Carli King of Greenville, Indiana; a great-granddaughter Adreena Strohmeyer of Seoul, South Korea; sisters Irene McMurphy of Fairview and Leah Muhle of Enid. In lieu of flowers, tributes in memory of Chuck may be made through the funeral home to Liberty Southern Baptist Church, 1616 S. Jackson St., Enid, Oklahoma 73701.

The family of Charlie Dean Strohmeyer created this Life Tributes page to make it easy to share your memories.

Send flowers to the Strohmeyer family.