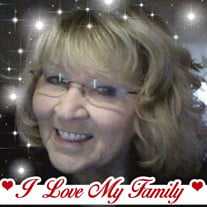 Graveside memorial service for Claudia Slowik, 75, of Enid, will be at Friday, August 16, 2019 at 10:00 a.m. in Enid Cemetery Chapel with Brian Meyer officiating. Cremation arrangements are by Anderson-Burris Funeral Home and Crematory. Claudia was born on September 9, 1943 in Salina, Kansas to Claude and Helen Mangel and died June 6, 2019 with her family by her side. She grew up in Salina. Claudia married Ronald Slowik and had three children. They were stationed in Nebraska, North Carolina, England and Enid, following Ronald’s military career. They later divorced. Claudia met her soul mate Wessley Winters and they were together for 30 years. She worked at Vance for Northrop. Claudia was the first woman parachute rigger. She enjoyed quilting and crocheting. Claudia was preceded in death by her parents; brother, Bernard; sister, Colleta Bruchard; and her soulmate, Wessley Winters. She is survived by her children, VaNee and Michael Williams, Vicki Troutman, and Donald and Janet Slowik; seven grandchildren, fifteen great grandchildren; three brothers, Gary, Ronnie, and Robert Mangel; sister, Saundra Reynolds; nieces, nephews and friends.

The family of Claudia Marie Slowik created this Life Tributes page to make it easy to share your memories.

Graveside memorial service for Claudia Slowik, 75, of Enid, will...

Send flowers to the Slowik family.