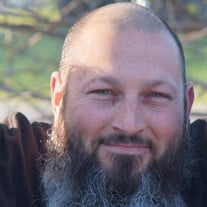 Celebration of Life service for Cory Allen Wood, 40 of Enid, will be 2:00 PM, Wednesday December 15, 2021 at Anderson-Burris Funeral Home Chapel. Cremation and arrangements are by Anderson-Burris Funeral Home & Crematory. Cory was born January 15, 1981 in Enid to Ray and Carla (Dunbar) Wood and passed away Monday, December 6, 2021 in Enid. Cory attended McKinley Elementary School K-6th, then he attended Chisholm Public School, graduating in 1999. Cory studied drafting at Vo-tech and at OSU Okmulgee, later he received his bachelors degree from Collins College in 3D Animation. Cory married Jennifer Johnson on July 2, 2009 in Enid where they made their home. On July 7, 2009 they gave birth to their daughter Nevaeh. Cory worked at GEFCO and later for PT Coupling as a manufacturing engineer. He loved to customize vehicles and motorcycles, he had a passion for drawing, and art in general. Cory took pride in himself and with his work, there was never a problem or project that he could not solve. In his younger years he was a member of various car clubs and was currently a member of the Hot Rod Inktober, a group of community artists. Cory never met a stranger, making friends wherever he went. He enjoyed spending time with his friends and family. He will always be remembered for being a devoted husband and friend, but most of all he will be remembered for his devotion and love for his daughter. Cory is survived by his wife, Jennifer; daughter Nevaeh; parents Ray and Carla Wood; his wife’s parents Ed and Bonnie Johnson; and several aunts, uncles and cousins. He was preceded in death by his grandparents Jim and Louise Wood, Harry and Meta Dunbar, cousins Jamie Dunbar, Tre Bradford, Sara Callis, and Jacob Callis.

The family of Cory Allen Wood created this Life Tributes page to make it easy to share your memories.

Celebration of Life service for Cory Allen Wood, 40 of Enid,...

Send flowers to the Wood family.