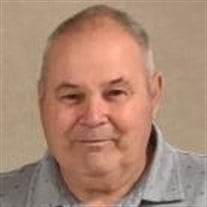 Celebration of Life Service for David L. (Papa) Hay, 74 of Enid, OK will be at Clay’s Collision Center, 1211 W. Spruce on March 6, 2021 at 11:00AM. Arrangements and cremation are under the direction of Anderson-Burris Funeral Home & Crematory. David was born on June 23, 1946 in Lawrence, KS to LeRoy and Barbara Berger Hay. He passed away Monday morning at Oklahoma Heart Hospital in Oklahoma City on February 22, 2021. He graduated from Enid High School in 1964. He married Diana Champion on September 24, 1966 in Enid where they made their home. David was an industrial mechanic. David graduated from Okmulgee Tech College, Okmulgee, OK in May of 1966. He was a veteran of the U.S. Army, serving from April 1968 to April 1970. He was a Past Exalted Ruler of the Enid Elks Lodge number 2104 from 1990-1991. Papa Hay was a simple man, who loved to tinker, build, and fix things. He was blessed to have three grandsons and many children who also called him Papa. He was blessed to attend many birthday parties at Leonardo’s Discovery Warehouse and enjoyed watching them use their hands and minds. So in lieu of flowers, we are asking memorials to be made in his name to Leonardo’s under the direction of Anderson-Burris Funeral Home. Leonardo’s, PO Box 348, Enid, OK 73702. In addition to his wife Diana, David is survived by his children, Ronald Hay and wife, Shanda and Carla Webster and husband, Barry, grandchildren, Tyler Murray, Hayden Webster, and Hunter Hay, and one sister, Clea Calloway. His parents preceded him in death.

Celebration of Life Service for David L. (Papa) Hay, 74 of Enid, OK will be at Clay&#8217;s Collision Center, 1211 W. Spruce on March 6, 2021 at 11:00AM. Arrangements and cremation are under the direction of Anderson-Burris Funeral Home & Crematory. David... View Obituary & Service Information

The family of David L. (Papa) Hay created this Life Tributes page to make it easy to share your memories.

Send flowers to the Hay family.