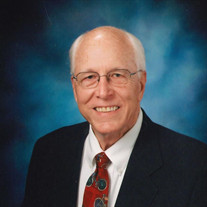 Mass of Christian Burial for David M. Jones, 80 will be Thursday, July 30, 2020 at 10:30 am in St. Gregory the Great Catholic Church with Reverend John Herrera celebrant. Burial will follow in Calvary Cemetery under the direction of Anderson-Burris Funeral Home and Crematory. Recitation of the Rosary will be Wednesday evening at 6:00 pm in Anderson-Burris Funeral Home Chapel. David was born in New Orleans, LA to D.M. and Carmen (Diaz) Jones on December 20, 1939 and entered into rest in Enid, Oklahoma on July 26, 2020 with his family by his side. He graduated from De La Salle High School in 1957. After his freshman year at Loyola University, David entered the seminary of the Brother’s of the Christian Schools. (Christian Brothers). He continued his education there and did student teaching in Lafayette, LA. David moved to Enid in 1963 to work for KCRC radio and was known as DJ the DJ. He took graduate courses at Phillips University. He met then married Mary Lou Day in 1964. To this union 3 sons were born. David worked at Day Ford from 1965 until the dealership was sold in 1987. He remained active in the car business until retirement. In 1990, he met Mary Catherine (Cunningham) Moon and they were married on April 6, 1992 in Metairie, LA. They made their home in Enid. David was active in civic and business ventures including: past president of Enid Jaycees, Enid Rotary Club, the civil service fire commission, Knights of Columbus, and the Oklahoma JCI Senate. He served on the board of Hedges Speech and Hearing. He was active in the Chamber of Commerce and the YMCA. Always active in church activities, David sang and played the banjo in the St. Francis Folk Group. David was a member of St. Gregory the Great Catholic church, where he was an Eucharist minister and usher. He is survived by his wife, Cathie Jones; sons, Andrew E. Jones, Las Vegas, NV, and David “Nick” Jones of Oakwood, GA; stepchildren, Caree Moon, Moore, OK, and Eric Moon, Enid; two grandchildren, Mason Jones and Noah Moon. He was preceded in death by an infant son, Marion Jones; parents; brother, Bobby Jones. Memorials may be made through Anderson-Burris to St. Gregory Good Samaritan Fund, Our Daily Bread or St. Joseph Catholic School.

Mass of Christian Burial for David M. Jones, 80 will be Thursday, July 30, 2020 at 10:30 am in St. Gregory the Great Catholic Church with Reverend John Herrera celebrant. Burial will follow in Calvary Cemetery under the direction of Anderson-Burris... View Obituary & Service Information

The family of David M. Jones Jr. created this Life Tributes page to make it easy to share your memories.

Mass of Christian Burial for David M. Jones, 80 will be Thursday,...

Send flowers to the Jones family.