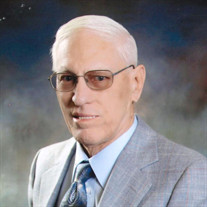 Funeral service for Delbert Zahorsky, 93 of Enid, will be Tuesday, December 14, 2021 at 10:00 am in Anderson-Burris Chapel with Rev. Don Tines officiating. Burial will follow with military honors in Memorial Park Cemetery. Visitation with the family will be Monday evening from 6:00 to 7:00 pm at the funeral home. Delbert was born on June 22, 1928 in Alva, Oklahoma to Dave and Edith (McCoy) Zahorsky and died on December 7, 2021 in Enid. Del attended Green Valley, a one room country school for his first eight years and graduated from Dacoma High School. After high school, he enlisted in the United States Air Force, serving six years, two of those years in Japan. Del was discharged in 1954 and went two years in Automotive Trade School in Denver to become an auto mechanic. He was an auto mechanic working in Colorado Springs and Fairview, Oklahoma until 1967. Then he owned and operated a Conoco Service Station until 1974. Del owned a Ford Tractor Dealership in Fairview until 1977. He moved to Enid in 1977 and went to work for Central Machine and Tool until 1996. On May 18, 1987, he married Barbara “Barbi” Cashion in Lake Tahoe, California and they made their home in Enid. After retiring, Del started a brush-hog mowing business that he operated for 17 years. Del was preceded in death by his wife, Barbi, parents, and five siblings. He is survived by children, Gary (Sheryl Jones) Zahorsky, Steve (Debbie) Zahorsky, Debbie (Bailey) Scott, Linda (Jeff) George, and Pam (Doug) Sells; step-daughter in law Kathy McCowan; seven grandchildren, six great grandchildren; brothers, Stan and Carroll Zahorsky; sister, Marlene McLean; his beloved white Westy Terrier, Sissy; other relatives and friends.

Funeral service for Delbert Zahorsky, 93 of Enid, will be Tuesday, December 14, 2021 at 10:00 am in Anderson-Burris Chapel with Rev. Don Tines officiating. Burial will follow with military honors in Memorial Park Cemetery. Visitation with... View Obituary & Service Information

The family of Delbert "Del" W. Zahorsky created this Life Tributes page to make it easy to share your memories.

Funeral service for Delbert Zahorsky, 93 of Enid, will be Tuesday,...

Send flowers to the Zahorsky family.