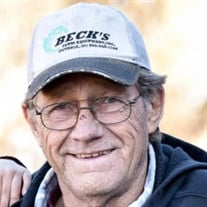 Denton K. Reim, beloved Father, Son, Brother and friend, was born on April 4, 1947, to Louie and Luella Reim, and passed from this life on December 26, 2020. Denton was raised on the family farm, known as the Home Place, southwest of Marshall with his siblings Terry and Darla, until 1963 when the Reim’s moved into town. He was a member of St. Paul’s United Church of Christ and attended Marshall schools. He was involved in various activities in school including his local FFA chapter, and was a standout and Captain of his High School Football team..winning the State Championship in 1964. Denton graduated from Marshall High School in 1965. From there he attended Oklahoma State Tech in Okmulgee, and was a member of the Oklahoma Army National Guard from 1969-1973. He also owned the local body shop in Marshall before becoming a full time farmer/rancher. In May of 1969, Denton was married to Beverly Rudd. From this union came 4 daughters. Kristina, Sheryl, Melanie, and Suzanne. He was a hard worker, and instilled the Reim work ethic in them from on early age. There were bottle calves and chickens to tend to, and in the summers a huge garden to take care of. But then there were days off. Denton was a lifelong OU football fan, and on Saturdays you could find him in his chair with the volume down on the TV and up on the radio to listen and watch the game. Many Sundays were spent at what the family refers to as Lake Louie, on the farm east of town. He loved teaching his girls to cast and fish, and made so many great memories there with friends and family. A lover of anything outdoors, he also loved spending time at the lake..fishing, camping, and teaching anyone eager to learn or brave enough to get behind the boat to water ski. In the hottest part of the summer, he loved to pack up and vacation in the mountains. Red River, NM was his favorite place to get away from the Oklahoma heat. In his 50 plus years of farming, Denton employed several “hired hands”. He enjoyed teaching them and sharing his knowledge of all things automotive, including maintenance and repair of equipment. He could tear anything down and rebuild it. He expected them to work as hard as he did. Many of them greatly appreciated this and would stop in years later just to visit. Eventually, there were grandkids, and the teaching started all over again. He loved to have them go with him to check and feed cows, take them for rides on the combine in the summer, and helped teach them all to fish and love the outdoors. Denton was an active member of the Marshall community. He served as a volunteer firefighter, helped with the Prairie City Days celebrations, and served many terms as Mayor and City Councilman. He was always working to make the town as viable as it could be. He will be greatly missed by all who loved him so dearly. Denton is preceded in death by his parents, Louie and Luella Reim, and brother Terry. Survived by sister Darla(George) Beeby of Stillwater, 4 daughters Kristina(Aaron) of Covington, Sheryl(JJ) Nowlin of Yukon, Melanie(Adam) Steinert and Suzanne(Raydn) Bowling, all of Marshall, and 9 grandchildren Gavyn Reim, Karsyn and Lukas Steinert, Kennedy and Ashton Cassody, Karly and Jenna Nowlin, and Bryson and Kolter Bowling, as well as a host of other nieces and nephews and cousins and other beloved family and friends. A memorial service will be held in Marshall at the Alumni Building(formerly Christian Church) on Thursday January 7th at 2PM. Reverend Tommy Donaldson officiating. Memorial contributions may be made to St. Paul’s United Church of Christ in Marshall, OK or Hospice Circle of Love in Enid, OK

Denton K. Reim, beloved Father, Son, Brother and friend, was born on April 4, 1947, to Louie and Luella Reim, and passed from this life on December 26, 2020. Denton was raised on the family farm, known as the Home Place, southwest of Marshall... View Obituary & Service Information

The family of Denton K. Reim created this Life Tributes page to make it easy to share your memories.

Send flowers to the Reim family.