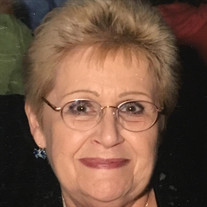 Memorial services for Dianna Mason will be Friday, February 22, 2019 at 11:00 am at Emmanuel Baptist Church. Viewing and visitation will be Wednesday and Thursday from 8:00 am to 8:00 pm at Anderson-Burris Funeral Home. Dianna Mason went to be with her Lord & Savior on February 17, 2019 at Greenbrier Nursing Center. She was born in Quinlan, Oklahoma on July 27, 1938 to Ray & Betty Witcher. Her father was a Santa Fe Depot agent and her mom was a grade school librarian. She was preceded in death by her parents and a brother, Bob Witcher. She is survived by her husband, Harry of Enid, Oklahoma; two daughters: Cheryl, married to Greg Henry of Lakewood, Colorado and Raye Lynne, married to Max Janzen of Casper, Wyoming; four grandsons: Andy Cole & Brandon Henry of Lakewood, Colorado; Jarret Janzen of Cheyenne, Wyoming; Cole Janzen of Colorado Springs, Colorado; and one granddaughter, Katie, married to Tim Blondin, of Aurora, Colorado and two great-granddaughters: Naomi & Abbie Blondin, of Aurora, Colorado; a sister, Mae Bell Pendleton, of Albuquerque, New Mexico; a sister-in-law, Theresa Witcher, of Tulsa, Oklahoma; many nieces, nephews and a multitude of friends. She graduated from high school in Spearman, Texas. She went to Enid Business College where she met her future husband, Harry Mason. They were married December 26, 1958 in Enid, Oklahoma at Calvary Baptist Church and were married over 60 years. Harry & Dianna spent 4 years in the Air Force. While Harry was overseas in Saglek, Labrador, Dianna & Cheryl lived by Dianna’s parents in Spearman, Texas, and she worked at The First State Bank. After living in New Mexico two years, where Raye Lynne was born in Clovis, the family moved back to Enid, Oklahoma. Dianna worked at Biggars Fertilizer and then at KGWA radio station. In 1979 they moved to Beaver, Oklahoma, where she worked at the Drum & Venable law firm. She then spent eight years in her favorite job as secretary at Beaver High School. While secretary for the counselor, Mr. Robert Parr, he told her that he thought she counseled more kids than he did. She always had a soft spot for youth and worked with Baptist your groups as well as others wherever they lived. She had an excellent singing voice and sang solos and in church choirs wherever she lived. When Beaver First Baptist Church was without a music director, she directed the music there for two years. Thank you to the nurses, aides and staff at Greenbrier for excellent care and to Alicia of Hospice Circle of Love for her companionship and love. Dianna has achieved her lifetime goal of eternity with her Lord and Savior Jesus Christ. She will be missed so much by all. Memorials may be made to Emmanuel Christian School. Condolences maybe made online at www.andersonburris.com.

Memorial services for Dianna Mason will be Friday, February 22, 2019 at 11:00 am at Emmanuel Baptist Church. Viewing and visitation will be Wednesday and Thursday from 8:00 am to 8:00 pm at Anderson-Burris Funeral Home. Dianna Mason went to... View Obituary & Service Information

The family of Dianna Rae Mason created this Life Tributes page to make it easy to share your memories.

Memorial services for Dianna Mason will be Friday, February 22,...

Send flowers to the Mason family.