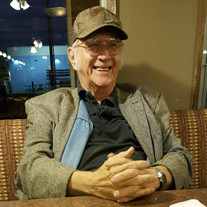 Donald J Willowby was born on December 17, 1935 to John R and Ollie M Willowby of Elk City, OK and passed away in his home at Pond Creek, OK on January 29, 2022. Don was 86. Don was a sweet man. He was ornery at times and loved to tell jokes, and was very much a practical joker. He was there when you needed him and even when you didn't. He was truly loved by his family and his friends and he will be missed by all! Don graduated from Elk City High School and attended trade school at Southwestern Oklahoma State University. Don was a truck driver and drove from one side of the United States clear across to the other side. His stories included driving trucks at the same time as Elvis Presley was a truck driver. Don served in the US Army as MP at the Henry Kaserne Army Base in Germany. His daughter admired her dad's stories so much she followed in his footsteps and became a law enforcement officer. Don loved NFL football and he would say "he was an active Cowboys fan from home" for both the OSU and Dallas Cowboys teams. Don and his son would get together and see who could cheer the loudest until the grandkids came along and out cheered them both.Don Loved to sing with the oldies of country music and loved to listen to the Grand Ole Opry. His father was a true blacksmith by trade and would go around to the forts to fix-up and do their metal or leatherwork equipment and shoe the horses in Western Oklahoma. Don picked up the skill too and made, built, or repaired things working with his hands and taught the next generation about woodworking and leatherwork projects. Every Saturday morning was Dad's day. Don would cook breakfast for his kids which included eggs, bacon, and Dad's special big fluffy delicious pancakes while mom was working. Don loved barbecuing and grilling just about everything, especially steaks. He was active in both the Boy and Girl Scouts, enjoying campouts and serving as a Scoutmaster. Don was very proud of his sons, as he watched his oldest receive the highest award and honors in Boy Scouts. Don served as Scoutmaster and like a second father to many international Scouts that would visit the state. Don was very proud of his daughter and watched her receive the highest award and honors in Girl Scouts. Don held the title of Troop Dad. Don hauled, and carried all the equipment and Girl Scouts in his vehicle on all of the Girl Scout's camping trips for many, many years. Always in dad mode, always in protective mode, always and forever in hero mode. His daughter was very proud of her dad and awarded him a special Honor Of Service. Don worked for many years as a part manager for Mack Trucks. Don enjoyed working on cars with his boys and grandson. He taught all his kids how to fix and upkeep their own vehicles. Don had a passion and enjoyed spending time with his family and friends hunting, fishing, and raising hunting dogs for bird hunting. He made sure to teach his kids, grandkids, and great-grandkids the safety rules of shooting guns and fishing. Don loved to go and visit family. Even at age 80 he was still driving across states to visit relatives and friends. Don tried to be at every event that the grandkids and great-grandchildren had. He was inspiring! There's one more empty place on Earth and there's one more bright star in the sky. Don was preceded by his wife Betty Willowby, son David Willowby, and a great-grandson. He is survived by his son Douglas of Alabama and daughter Donna of Oklahoma, 7 grandchildren, and many more loved great-grandchildren, nephews and nieces. In Lieu of flowers the Willowby family asks for donations be made to an organization to help veterans and their families. Helping Veterans: Disability American Veterans (DAV) www.dav.org The Willowby family thanks you for your support.

Donald J Willowby was born on December 17, 1935 to John R and Ollie M Willowby of Elk City, OK and passed away in his home at Pond Creek, OK on January 29, 2022. Don was 86. Don was a sweet man. He was ornery at times and loved to tell jokes,... View Obituary & Service Information

The family of Donald J. Willowby created this Life Tributes page to make it easy to share your memories.

Send flowers to the Willowby family.