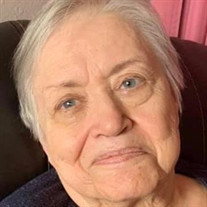 Celebration of Life Service for Donna Eggers will be 2:00 PM, Sunday, September 12, 2021 at Garber Public School, with Rev. Mark Hein officiating. The family asks/highly recommends all attendees wear masks. Donna Gayel Backhaus Eggers was born May 12, 1942, in Enid, OK to Irven and Mildred Backhaus and went to her Heavenly home on August 25, 2021. Donna grew up in Covington, OK, attending Covington-Douglas Schools through the 11th grade when she married Rene Eggers on August 2, 1959, at St. Paul’s Lutheran Church in Enid. They were married just short of 40 years. To this union, they added four daughters, Mona, Geri, Jodi, and Dana. After being a stay-at-home mother, housewife and partner in Rene’s farming operation, she attended night classes in Garber to get her GED in 1974. Immediately following, she attended Oklahoma State University, graduating in 1978 with a bachelor’s degree in Elementary Education. In the fall of 1978, Donna started her teaching career at Garber Public Schools, teaching Language Arts in the Jr. High. She retired in 1999. She then taught at St. Joseph’s Catholic School for two years following retirement. Donna was a life-long and faithful member of the Lutheran Church, Missouri Synod. She was baptized and confirmed at St. John’s Lutheran Church, Covington where she also served at Sunday School and Vacation Bible School teacher. In 2002, Donna began volunteering for Garfield County CASA and had three cases during her years of service. She was selected as CASA of the Year in 2010. Donna was preceded in death by her parents and brother, Owen Backhaus. Survivors include her four daughters, Mona and husband Mark Hein of Garber, Geri and husband Bruce Ayers of Enid, Jodi Cline and husband Floyd Jones of Ponca City, and Dana Eggers Morris of Enid. Also included are her grandchildren, Justin (Taylor) Cline of Perkins, Tanner (Elizabeth) Cline of Duncan, Conner Cline, Blackwell, Adam Long, Enid, Sara (Reuben) George, Hayward, CA and Joel Hein, East Wenatchee, WA. Great-grandchildren include, Kennedy, Colt, Campbell, and Cooper Cline, Maddison Hampton and Christian Long. She is also survived by God-child/ ”granddaughter,” Tiffany Smith. We want to thank the employees at Golden Oaks Nursing Center for the excellent care and unconditional love given to our mom the past three years. A special thanks also goes to staff with Elara Hospice. Memorials may be made to Immanuel Lutheran Church of Garber, Alzheimer’s Association, Garfield County CASA or to any of a donor’s preference.

The family of Donna Gayel Eggers created this Life Tributes page to make it easy to share your memories.

Celebration of Life Service for Donna Eggers will be 2:00 PM,...

Send flowers to the Eggers family.