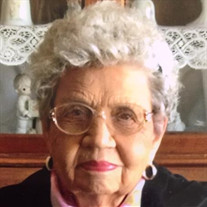 After an earthly sojourn of 93 years, Jesus Christ came to Dorothy June Van Scyoc in the early hours of March 3, 2019 to take her lovingly to her heavenly home, where she embraced Jesus, her beloved husband, and all her friends and family who preceded her there. Dorothy was born on June 11, 1925 to George and Anna Astley of Helena, Oklahoma. She was the 2nd of 6 children (4 girls and 2 boys). Two of her sisters survive her. Dorothy’s life centered on Jesus, who saved her as a teenager during a revival in the Methodist Church in Helena. Following Him, she met and married WWII veteran, Finley Van Scyoc of Enid, who lost the coin flip, but won the prize, not only on that first date, but for the rest of his life. Married on December 22, 1946 they built a house and made a family home on Randolph Avenue. They lived in that same house for 63 years, very seldom apart, before Finley’s heavenly homegoing in 2010. Four children were born to them, visible manifestations of their God-given love for Him and each other. It is likely that each of their children were in the nursery of First Baptist Church, Enid, their only church home, in their 2nd week of life. If you knew Dorothy and Finley, it would not surprise you that each of their children serve the Lord wholeheartedly where they live today: Cathy (Jim) Gantenbein of Port Orchard, Washington, Susan (Brent) Ballweg of Choctaw, OK, Diane (Tom) Schenk of Enid, and Huck (Tammie) Van Scyoc of Hot Springs, Arkansas. Over the years God has continued to bless their family with 9 grandchildren and 18 great grandchildren. Throughout her life Dorothy served the Lord, her family, her church, and her community in a variety of ways. Trained as a registered nurse at Enid Nursing School, she returned to that school as their clinical instructor, emphasizing to student nurses the importance of patient care. Later, she spent years at Bass Hospital caring for patients and families and eventually rising to the position of In-Service Director. After retiring from Bass, she continued in personal, private practice in a variety of capacities. Together, Dorothy and Finley faithfully and lovingly strengthened the ministry of their church. Dorothy was best known for caring for newborn babies in the church nursery and patching up youth as the church nurse at Falls Creek encampments and various mission trips. She also enjoyed Bible studies, singing in the choir, especially “Singin’Saints,” and in her later years traveling around the world with her fellow seniors. Despite her many activities, Dorothy’s heart was in her home with her family, where her hands were never idle. She kept busy sewing beautiful dresses for her girls, staunching the bleeding of her oft-injured son, quilting keepsakes for her family, planting, picking, canning vegetables, cultivating and enjoying numerous flower gardens around their home (Dorothy is an Enid legend—well at least with her family—in her ability to bend over at the waist performing gardening tasks for hours on end), and after Finley’s retirement working with him in the garage repairing and refinishing antique furniture. She was an excellent cook that could make food go a long way. This blessed her family, but also many others over the years who were invited into their home for a meal. Dorothy also loved to laugh and play games (she seldom lost) with her family, and always cried when they had to leave. Dorothy’s children would like to express heartfelt gratitude to Mom’s caregivers over the last 10 years of her life: Tammy Teehee, Karen Ibarra, Ella Partridge, Elaine Johns, Kacey Madden, Rhonda January, Drena Holmes, and the care staff of East Hall at Golden Oaks. Your love for Mom made her final years special to her and to us. There will be a short burial service at 1 pm on Thursday, March 7, at Enid Cemetery, followed by a memorial service at First Baptist Church, Enid, OK at 2 pm. Memorial gifts may be given to the First Baptist Church, Enid, 125th Anniversary Fund. The funeral home will serve as custodian

After an earthly sojourn of 93 years, Jesus Christ came to Dorothy June Van Scyoc in the early hours of March 3, 2019 to take her lovingly to her heavenly home, where she embraced Jesus, her beloved husband, and all her friends and family who... View Obituary & Service Information

The family of Dorothy June Van Scyoc created this Life Tributes page to make it easy to share your memories.

After an earthly sojourn of 93 years, Jesus Christ came to Dorothy...