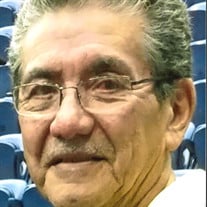 Funeral service for Publio Edelberto Rios Morales will be Tuesday, July 20, 2021 at 11:00 am in Anderson-Burris Funeral Home Chapel with Daniel Cordova officiating. Burial will follow in Calvary Cemetery. Edelberto was born on May 27, 1942 in Puerto Barrios, Guatemala to Jose Rios Dominguez and Maria Obdulia Morales and died on July 15, 2021 in Oklahoma City, Oklahoma. He grew up in Guatemala and came to the United States in 1986. He became a U.S. Citizen and moved to Oklahoma in early 1990s. Edelberto worked for many years at Roberts Ranch. After retirement, he enjoyed living in Guatemala. Edelberto was called grandpa by his many grandchildren and great grandchildren. He was 79 years old but in his heart he was way younger than that. He loved life, he enjoyed his life in this earth and lived his life his way. Even though he had all his children except one, grandchildren, great grandchildren all living here in Enid, after retiring he always said he wanted to go back to Guatemala, and he did. He was a happy man living there enjoying his walks to the park and sitting there on a bench watching people go by. He loved everything about his beloved Guatemala, the weather, the rain, the noise, the dirt roads, the paved roads, but mostly the life that its narrowed streets showed with all the movement of people going on their daily lives. Grandpa will live through every single one of us, he will be deeply missed. He was preceded in death by his parents; granddaughter, Dominique; 2 brothers and one sister. He is survived by children, Mariam Rios Day, Heydy Harrington, Marlyn Lewis, Edelberto Rios, Mavis Rios, Bryan Romario Rios, and Alejandro Rios; 20 grandchildren, 13 great grandchildren; brother Jose Luis Rios.

Funeral service for Publio Edelberto Rios Morales will be Tuesday, July 20, 2021 at 11:00 am in Anderson-Burris Funeral Home Chapel with Daniel Cordova officiating. Burial will follow in Calvary Cemetery. Edelberto was born on May 27, 1942... View Obituary & Service Information

The family of Edelberto Rios Morales created this Life Tributes page to make it easy to share your memories.

Funeral service for Publio Edelberto Rios Morales will be Tuesday,...

Send flowers to the Morales family.