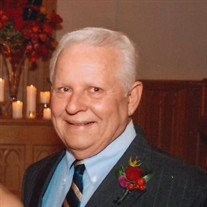 The Celebration of Life Service for Ernest “Pat” Blanton, 79 of Enid, will be 2:00 PM, Friday, April 9, 2021, at Oakwood Christian Church with Rev. Eric Keller officiating. Cremation arrangements under the direction of Anderson-Burris Funeral Home & Crematory. Pat was born December 7, 1941, in Enid, to Ernest “Ernie” & Esther “Patti” (Matsler) Blanton and passed away on March 22, 2021, in Oklahoma City. Pat grew up in Enid and attended Enid Public Schools. He participated in track and football through junior high and high school and graduated from Enid High School in 1960. He was a member of the Sigma Nu Fraternity at The University of Oklahoma and played football for OU during his freshman year. After college, Pat worked with his father, Ernie Blanton. He was a Texaco distributor and owned Texas Propane Company. Pat loved to play golf and inherited that skill from both his mother, who was posthumously inducted into the Oklahoma Women’s Golf Hall of Fame, and father, who was also an excellent golfer. Pat won two Club Championships and five Senior Club Championships at Oakwood Country Club and numerous Enid Fourball Championships. He had a love for all animals, cars, fixing and building things, and always found a way to keep himself busy with projects. Pat loved his family very much and especially enjoyed spending time with his grandchildren. He was preceded in death by both of his parents. Pat is survived by his wife of 45 years, Kay Blanton; son, Chris Blanton and his wife Melissa; daughter, Jenny Charles and her husband Trevor; three grandchildren, Emma, Olivia and Tucker; and sister, Pamela King and her husband Lyle. Memorials may be made through the Anderson-Burris to National Mill Dog Rescue (Colorado Springs) where his sister is the Grooming Team Leader and volunteer.

The Celebration of Life Service for Ernest &#8220;Pat&#8221; Blanton, 79 of Enid, will be 2:00 PM, Friday, April 9, 2021, at Oakwood Christian Church with Rev. Eric Keller officiating. Cremation arrangements under the direction of Anderson-Burris... View Obituary & Service Information

The family of Ernest "Pat" Paul Blanton created this Life Tributes page to make it easy to share your memories.

The Celebration of Life Service for Ernest “Pat” Blanton, 79...

Send flowers to the Blanton family.