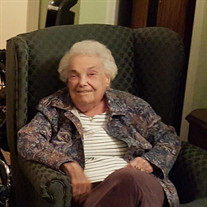 Funeral services for Frances McKee, 99 of Waukomis, will be Friday, September 18, 2020 at 2:30 pm in Anderson-Burris Funeral Home Chapel with Pastor David Jones officiating. Burial will follow in Memorial Park Cemetery. Visitation with the family will be Thursday evening from 6:00 to 7:00 pm at the funeral home. Frances was born on July 17, 1921 in Waukomis, Oklahoma to Pete and Lula (Taylor) Rose and died on September 14, 2020 at her home in Waukomis. She grew up in Waukomis. Frances married John Cain and they had three children. She later married Leo McKee and they had three children. Frances worked various jobs and was a meat wrapper for many years at the meat market. She was a member of Waukomis Christian Church. Frances loved her dogs and her family. She was preceded in death by her husband, Leo; son, Rance McKee; grandson, James, and great grandchild, Dakota; sister, June Murphy. She is survived by her children, Marilyn Fuxa, John (Kim) Cain, Debbie (Ron) Peterman, Katrinia Krupke, Koty (Debbie) McKee, and daughter in law, Robin McKee; numerous grandchildren and great grandchildren; several great, great grandchildren and great, great, great grandchildren; brother, Gerald Rose; sisters, Lucille Deeds and Irene Oliver and other relatives. Memorials may be made through Anderson-Burris to Waukomis Christian Church or Hospice Circle of Love.

The family of Frances M. McKee created this Life Tributes page to make it easy to share your memories.

Funeral services for Frances McKee, 99 of Waukomis, will be Friday,...

Send flowers to the McKee family.