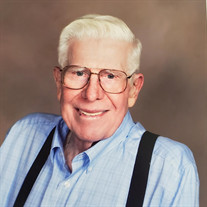 Mass of Christian Burial for Fred A. Howard will be Monday, December 30, 2019 at 10:00am in St. Francis Xavier Catholic Church with Rev. Kevin Ratterman, and Rev. John Herrera celebrants. Burial will be in Pond Creek Cemetery under the direction of Anderson-Burris Funeral Home and Crematory. Recitation of the Rosary will be 5:00 p.m. on Sunday, December 29, at the funeral home with Deacon Tony Crispo presiding, with visitation following Frederick was born on July 12, 1937 on a farm east of Jefferson, Oklahoma to William Fred and Augusta Stordahl Howard and died on December 24, 2019 in Enid. . Fred attended Jefferson High School and Northern Oklahoma College in Tonkawa. He enlisted in the U.S. Air Force on January 9, 1959 and served until November 8, 1962. Fred was very proud to serve his country. While in the service, he was awarded the American Spirit of Honor Medal for his leadership ability. Fred was stationed in Texas, Alaska, and New Mexico. While in the service, he taught accounting. He met Sandy Atwood, while he was stationed in Alaska and they were married on November 26, 1960 at Eielson Air Force Base. Fred worked in the grain industry for 30 years and retired from Union Equity as Senior Vice President in July 1992. He continued to help grain corporations as a business consultant and interm manager. Fred volunteered at his church, St. Francis, since he retired in 1992 in the accounting area. He received many awards in the grain industry. He was a member of St. Francis and the Knights of Columbus. On February 15, 2005, Fred and Sandy received the Venerable Cross Pro Essisia Et Pontifice by Pope John Paul II, given by Archbishop Eucibius Beltran. Fred was installed in the Oklahoma Grain Hall of Fame in 1977. Fred was preceded in death by his parents, one grandson, and nine brothers and sisters. He is survived by his wife, Sandy; three children, Bill Howard, Rick Howard, and Marie Howard; six grandchildren, and five great grandchildren; his coffee buddy, Alan Livingston, and many friends. Memorials may be made through the funeral home to Our Daily Bread or St. Joseph Catholic School.

Mass of Christian Burial for Fred A. Howard will be Monday, December 30, 2019 at 10:00am in St. Francis Xavier Catholic Church with Rev. Kevin Ratterman, and Rev. John Herrera celebrants. Burial will be in Pond Creek Cemetery under the direction... View Obituary & Service Information

The family of Frederick "Fred" Allan Howard created this Life Tributes page to make it easy to share your memories.

Mass of Christian Burial for Fred A. Howard will be Monday, December...

Send flowers to the Howard family.