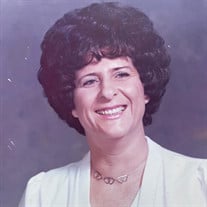 Frieda Ann Fisher, born on February 2nd, 1930 to Frank and Margaret Faulkner in San Angelo, Texas, left us to be with our Lord on January 4th, 2021. She married Billy Perry at a young age, and had two children, Johnny Roy and Patricia Ann. After that marriage ended, she met Foy Gene Fisher. The two of them married on June 19th, 1951 in Abilene, Texas. Foy adopted Johnny and Patricia. Later they had Linda Jean and Gary Allen. Foy and Frieda were married for 54 years before the passing of Foy in 2005. Frieda had three sisters and six brothers. She was preceded in death by her siblings, her husband, Foy, her sons, Johnny and Gary, and one great granddaughter, Claudia Ann Weathers. She is survived by her daughters Patricia Daniels of Arizona, and Linda Weathers (husband Rick Weathers) of Marshall, Oklahoma. She had twelve grandchildren and numerous great grandchildren. Most of her family and acquaintances over the years know of her as Ann. Even her husband, Foy, called her Ann. It wasn’t until after Foy’s death that she went by Frieda. Her family was very important to her. She had dozens of containers full of family pictures. The walls and shelves of her house were lined with them. Her great granddaughter, Claire, once said, in amazement, “G-G-Ma, you have a lot of pictures!” If there was an empty space on a table, shelf, or fireplace mantel, she would find a picture to put there. She loved her family. Ann loved cats, Texas, sunflowers, yellow roses, blue bonnets, and the American flag. She loved coffee, tomatoes, pineapple upside-down cake, apple pie, and chocolate shakes. Telephone calls, cards, letters, and the company of family meant the world to her. When visiting her, no matter if you were family or friend, landlord or delivery man, you were going to be taken on a tour of her house. You would see her pictures, hear stories associated with them, and then be asked to sit and visit for a while. The visit would consist, mostly, of you listening and Ann talking. If she asked a question you may get a few words in, but it was never long before she was again leading the conversation. The woman could talk! She was a very patriotic lady. Her husband, Gene, served in the Army. Ann had four grandsons who served in the military: Tony Daniels was in the Navy, Brent Weathers was in the Marines, Kelly Weathers served in the Oklahoma Army National Guard, and Robert Fisher was in the Army. She was very proud of her brothers who served their country in “Doublya Doublya Two” (WWII). Every 4th of July she would deck the outside and porch of her house with American flags and red, white, & blue décor. If you weren’t wearing patriotic clothing on Independence Day, she would question you as to why. She loved hosting Independence Day family parties at her house on West Rupe in Enid and watching her family light up the sky with fireworks. Her love of the Dallas Cowboys was a patriotic act, since they are “America’s Team”. After the loss of her husband, Gene, she tried very hard to find a place to settle into and relax. But she has a “go-go-go” personality. So, every nine months, like clockwork, she would get anxious to move. Even very late in life, she would be on the phone talking to realtors about rent houses in Enid, Covington, or Crescent. But she never really found her perfect spot until last Monday. After 16 years of searching and 15 moves, she found her forever home with her Lord and Savior, Jesus Christ. The family requests memorials be made to Hospice, Circle of Love (hospicecircleoflove.com/donation.html).

Frieda Ann Fisher, born on February 2nd, 1930 to Frank and Margaret Faulkner in San Angelo, Texas, left us to be with our Lord on January 4th, 2021. She married Billy Perry at a young age, and had two children, Johnny Roy and Patricia Ann.... View Obituary & Service Information

The family of Frieda Ann Fisher created this Life Tributes page to make it easy to share your memories.

Send flowers to the Fisher family.