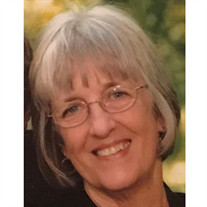 George Ann Davis Ford was born in Dallas, TX on July 30th, 1942 and went to heaven on November 1st, 2020. Kim was by her side when she took her last breath. She is preceded in death by her father, George Barry Davis, her mother, Marion Katherine Concannon Davis Canter, half-brother George B. Davis, and youngest sister, Katherine Ann Henslee. George Ann is survived by her husband of almost 59 years, Kim Ford, of Carrier, OK; children Scott Ford and wife Rita of Farmers Branch TX; Lon Ford of Carrier; April Foster and husband Rich of Enid; and her younger sister, Mary Ann Davis who resides in Ecuador. And her grandchildren, Sam and wife Sarah, Jack, Max, Grace, Lonnie and wife Taylor, Bailey, and Nick and Nicole Foster and children Taylor, Jace and Kyndall, and nephew AJ Henslee, wife Amber and children Justin and Allie Ann. George Ann Davis grew up in Dallas TX where she attended Hillcrest High School. During high school, George Ann met Kim at church camp. They reconnected again during college. It was then she transferred from East Texas State University to Oklahoma State University where Kim was going to school. They were married December 27th, 1961 while they were both still in school. Kim graduated with a degree in Animal Husbandry and they moved to the farm in Carrier. George Ann spent many years as a full-time farm wife, a role she excelled in. She learned to garden, can fruits and vegetables and made the best bread. Kim and Lon have continued the garden tradition by canning beans and corn. When her children became older, she began working as a substitute teacher, and fell in love with teaching. She returned to college at Phillips University and received her elementary education degree. She also received her Master’s in Education from Phillips University. She taught at Eisenhower Elementary, Emerson Junior High and Lincoln Alternative School – which she LOVED!!! She taught school for over 30 years, and she often ran into her former students. She was known to bring home her science class pets each summer; and had a few of her own (including snakes and hermit crabs). For years she tagged Monarch butterflies for the University of Kansas – a passion that she shared with her students. She and her daughter April did this together many times and April has continued this tradition. George Ann began running at the age of 40 and ran many 5Ks, 10Ks and 15Ks. She enjoyed going to the gym three days a week with a trainer. George Ann also loved art and sewing, making many of the kids’ clothes growing up. She loved anything Texas, blue bonnets (Texas state flower), and anything blue. George Ann and Kim enjoyed travelling. They often went to visit Kim’s cousins in Phoenix and to Mexico. While there, they enjoyed watching the dolphins. They went on many cruises including in Europe, Alaska and Hawaii. They also enjoyed trips to Washington DC and the Florida Everglades. George Ann took LOTS of pictures.........she never went anywhere without her camera. George Ann, her sister Kathy and daughter April went on many “Girls’ Weekends” – Hot Springs, AR; Roman Nose, OK; many shopping trips in Tulsa and OKC; Keith Urban concert (4 times). Always a good time. George Ann was an awesome cook!! She made wheat rolls from scratch (the wheat flour was from the wheat that she and Kim harvested), and cooked for all the holidays. Christmas morning tradition was the homemade cinnamon rolls and breakfast casserole, something that her family always looked forward to. She always made birthday celebrations special for all of us (kids, grandkids, spouses, aunts, uncles) Everything was always homemade. George Ann impacted many over the years, students, family, and friends. She will be missed. In lieu of flowers, donations may be made to the Oklahoma Medical Research Foundation, Alzheimer’s Division (OMRF.org). Celebration of Life Service for George Ann will be 1:00PM Saturday, November 14, 2020 at the Carrier Congregational Church. The family is requiring that anyone in attendance wear a mask. Cremation and arrangements are by Anderson-Burris Funeral Home.

George Ann Davis Ford was born in Dallas, TX on July 30th, 1942 and went to heaven on November 1st, 2020. Kim was by her side when she took her last breath. She is preceded in death by her father, George Barry Davis, her mother, Marion Katherine... View Obituary & Service Information

The family of George Ann Ford created this Life Tributes page to make it easy to share your memories.

Send flowers to the Ford family.