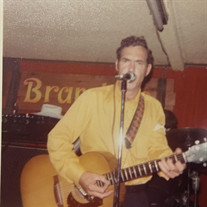 Celebration of Life service for Gerald L. “Jerry” Post, 81 of Enid, will be 10:00 A.M. Monday, September 16, 2019, in the Anderson-Burris Funeral Home Chapel with the Rev. Vernon Racer officiating. Cremation arrangements are under the direction of Anderson-Burris Funeral Home and Crematory. Gerald was born July 11, 1938, at Anadarko, OK to Floyd and Ruby Goodwin Post, and passed away Thursday, September 12, 2019, in Enid. He attended school in Deming, New Mexico. He married Judy Holmes on August 4, 1973, in Lake Stevens, WA. Gerald was his given name, but was called Uncle Petie by his nieces and nephews. He was known to many as Jerry. He loved playing music to anyone that would listen. He and his nephews Val and Dean Smith played several years around the Enid area. He had a band around the Everett Washington area for years called the Branders. Gerald spent most every Monday night at the Civitan Complex with many great musicians. He was a logger in Washington State until he came close and personal with a big hemlock tree that resulted in two broken legs. But he didn’t stop there, and got back on his feet and started all over again. He later moved to Oklahoma where he drove a truck in the oil field for 18 years. In addition to his wife Judy, he is survived by his children; Michael Ray, Mark Wayne, Randy Lee, Carolyn Ann and James Dewayne Post, 19 grandchildren, 37 great-grandchildren, a brother, Ivy, and two sisters, Juanita Bradshaw and Lisa, and his step-mother Lucille. He was preceded in death by his parents, son David Leroy, two brothers, Junior and Jimmy, and four sisters, Dorothy Fay, Georgia, Bernice and Erma. Memorials may be made through the funeral home to Oklahoma Medical Research Foundation Heart Division.

Celebration of Life service for Gerald L. &#8220;Jerry&#8221; Post, 81 of Enid, will be 10:00 A.M. Monday, September 16, 2019, in the Anderson-Burris Funeral Home Chapel with the Rev. Vernon Racer officiating. Cremation arrangements are under... View Obituary & Service Information

The family of Gerald L. "Jerry" Post created this Life Tributes page to make it easy to share your memories.

Celebration of Life service for Gerald L. “Jerry” Post, 81 of...