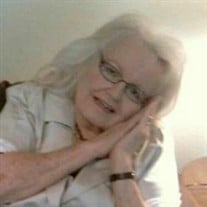 Celebration of Life Service for Gladys Cinnamon will be Monday, July 6, 2020 at 1:00 pm in Anderson-Burris Funeral Home Chapel. Private family burial will follow in Sunnyside Cemetery, Lahoma. Gladys was born on February 22, 1937 in Lahoma to Elmer and June Walton and died on July 2, 2020 in Enid. She grew up in the Lahoma and Enid area. On August 7, 1956, Gladys married Harold Weber in Clayton, New Mexico and the resided in many locations following his U.S. Air Force career. They had five children. Following his retirement from the Air Force, they returned to Enid in 1971. Gladys was a nurse, working at Enid Regional Hospital and later Enid State School, where she retired after 20 years. In 1977, she married Dale Cinnamon. After her retirement, Gladys worked at several area nursing homes, fulfilling her lifelong dream of helping others getting better. She was a loving mother and enjoyed her animals. She was preceded in death by her husband, Dale; parents; and brother, Bill Walton. Gladys is survived by her children, Sheila (Ralph) Ellison of Colorado Springs, CO, Andrew Weber of Pueblo, CO, Tim (Marcia) Weber, Justin (Sandy) Weber and Danny Weber, all of Enid; 10 grandchildren, and numerous great grandchildren.

The family of Gladys Anne Cinnamon created this Life Tributes page to make it easy to share your memories.

Celebration of Life Service for Gladys Cinnamon will be Monday,...

Send flowers to the Cinnamon family.