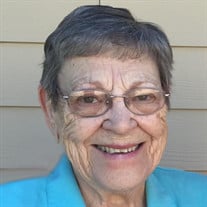 Memorial service for Glenda Mae Sweetwood, age 87 of Enid, will be 10:30 AM Saturday, October 31, 2020 at Garriott Road Church of Christ with Mr. Ray Rose officiating. Visitation with the family will be Friday evening 5:00 PM to 6:30 PM at Anderson-Burris. Glenda was born May 16, 1933 in Ames, Oklahoma to Ned E. and Margaret L. (Lindsey) Wood, and passed away on Sunday October 25, 2020 in Enid. Glenda attended and graduated from school in Ames. On November 8, 1953 she married Kenneth Sweetwood in Ames, and they made their home in Carrier. In 1956 they moved to Texas for 4 years. In 1960 they moved to Ames where they farmed, and in 1990 they moved to Enid. Glenda was a member of Garriott Road Church of Christ. Glenda loved to cook, especially pies and deserts. She became known with her pies while working at Jumbos. One Thanksgiving she made over 100 pies. She was also known for her honey butter and shared it with several of her friends. Glenda once owned her own restaurant for a few years in Hennessey and cooked at church camps. She even published her own cookbook Sweetie’s Pies and Other Goodies. Glenda never met a stranger. She always had a big smile and a warm heart for her family and friends. Glenda is survived by her children Kay and Randy Howard of Enid, Lynn and Tammy Sweetwood of Diamond, Missouri, and Jay and Lisa Sweetwood of Carrier; 8 grandchildren Gina and Lee Denten, Chad Driskell, Sheena Sweetwood, Wes and Whitney Sweetwood, Miranda and Aaron Bridgeman, Tanner Sweetwood, Kendra and Russell Wire, Dana and Bobby Mangham; 8 great grandchildren Brea and Marshall Bell, Ashton Mangham, Cason Purdy, Maxlyn and Brexlyn Sweetwood, Oakley Driskell, Wade and Waylan Wire; sister Jean Dyche, and sister in law June Wood. She is preceded in death by her husband Kenneth, brother Dean Wood, and brother in law Jim Dyche. The family would like to thank the staff at the Commons for the care and love they gave to Glenda. Memorials may be made through Anderson-Burris to Garriott Road Church of Christ, In search of the Lord’s Way or Westview Boys Home.

Memorial service for Glenda Mae Sweetwood, age 87 of Enid, will be 10:30 AM Saturday, October 31, 2020 at Garriott Road Church of Christ with Mr. Ray Rose officiating. Visitation with the family will be Friday evening 5:00 PM to 6:30 PM at... View Obituary & Service Information

The family of Glenda Mae Sweetwood created this Life Tributes page to make it easy to share your memories.

Memorial service for Glenda Mae Sweetwood, age 87 of Enid, will...

Send flowers to the Sweetwood family.