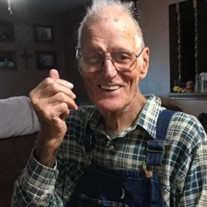 Celebration of Life Services for Herman Dwain Black, 86 year old Chester resident will be at 3:00pm at the Big Bend Pavilion, Canton Lake June 12, 2020. Dwain was born at home September 18,1933 near Canute, OK to George and Ruie Stubblefield Black. He passed away May 3, 2020. He attended his first year of school at Con 6 and then continued his schooling at Oakwood graduating in 1952. He attended one year at Oklahoma State University on a basketball scholarship. He married Barbara Davis and to this union three children were born, Mickey, Beckey and Tami. They later divorced. In May of 1965, he married Minnie Walgene Harris. He gained two children, Jim Adam and Ruth Ann. One child was born to this union, Anita Sue. After divorce he met and married the love of his life. He married LaDonna Gayle (Brandenburg) Daykin on April 29, 1977. He opened his heart and was blessed with four more children, Pat, Steve, Pam and Kenny. In addition to their children they raised two grandsons. His heart broke in August 2011 when LaDonna passed away. He worked as a farm hand, truck driver, roofer, in road construction, and a machinist. Doing whatever it took to support his family. He moved to California for work in 1964 returning to Enid, OK in 1965. He remained in Enid, OK working as a machinist and mechanic for George E. Failing Co. until his retirement. He belonged to the Local Steelworkers Union and was their president for several years. He purchased an acreage in Ringwood, OK and moved there in 1987. This was their retirement home. He moved to Chester, OK in 2017. He loved to dance and would often be heard to say that he left the playing and singing to his brothers Carl and Gene so he could hold and dance with the pretty girls. He loved life and spending time with family and friends. He enjoyed teaching his children and grandchildren and even enjoyed a good foot race occasionally. He enjoyed camping, fishing and hunting. He also enjoyed raising a garden, caring for his bee hives and tending to his cattle. He loved to travel and would take a road just to see where it went. He was never lost just taking the scenic route. Dwain was preceded in death by his wife, LaDonna, two step sons, Steve and Kenny, his parents, four brothers: Fredrick Black, Carl John Black, Theodore (Ted) Black and Elmer Eugene (Gene) Black and five sisters; Clara Chafin, Marie Huenergardt, Zela Layton, June Scott, and Gracie Fox. He will be missed by his children Mickey and Minh Glazebrook, Ernie and Beckey Mills, Mike and Tami Stone, Jim Adam Black, Frank and Ruth Ann Lessa, Richard and Anita Sue Donley, Pat Daykin, Gary and Pam Robinson, one brother Harold and wife Barbra Black, his sister in law, Mary Ruth Black, 17 grandchildren, 22 great grandchildren, and numerous nieces, nephews and friends.

The family of Herman Dwain Black created this Life Tributes page to make it easy to share your memories.

Send flowers to the Black family.