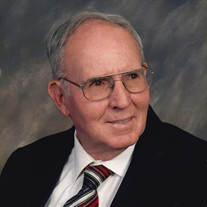 Funeral service for Herman Oscar Icke will be Monday, June 28, 2021 at 11:00 a.m. at Anderson-Burris Funeral Home Chapel with Reverend Jim Nance officiating. Private family burial will follow in Memorial Park Cemetery under the direction of Anderson-Burris Funeral Home and Crematory. Herman was born on September 17, 1929 in Alva, OK to Albert and Dora Mae Wilks Icke and entered the arms of his Savior, Jesus Christ on Thursday, June 24, 2021 in Enid. Herman grew up in Alva and worked at the Alva Flourmill. On August 2, 1950, he married Leona Shaw. He served in the U.S. Army, was deployed to Korea for 14 months and was honorably discharged as a Master Sergeant. He was a Teamster truckdriver for 23 years, hauling loads from Colorado Springs, Colorado to Moab, Utah. In 1988, they made their home in Enid. Herman was a Saint Mobile driver, Meals on Wheels driver, and led a devotional each month at two nursing homes for over 20 years. He enjoyed his nursing home and hospital ministry. Herman was preceded in death by his parents; six brothers, and three sisters. He is survived by his wife of 71 years, Leona; three children, Debbi Harrison, Ken Icke, and Karen Martz and husband, Chuck; three grandchildren, Chad Martz, Kimberly Fowler and Cole Harrison; six great grandchildren, Kaley, Layla, Kanden, Riley, Norah, and Sawyer; and many nieces and nephews. Memorials may be made through Anderson-Burris to St. Mary’s Volunteers.

The family of Herman Oscar Icke created this Life Tributes page to make it easy to share your memories.

Funeral service for Herman Oscar Icke will be Monday, June 28,...

Send flowers to the Icke family.