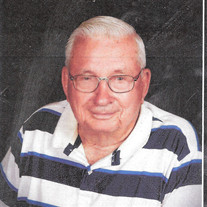 Funeral Service for Jim “Bud” Slater, 91 of Enid, will be 10:00 AM, Wednesday, May 8, 2019 at New Hope United Methodist Church with Rev. Emily Robnett officiating. Burial will follow in Memorial Park Cemetery with arrangements by Anderson-Burris Funeral Home & Crematory. Jim was born March 17, 1928 beside a hill in the Gloss Mountains in Belva, OK to James and Daisy Slater and passed away on May 4, 2019 at his home. Jim started school when he was 5 years old. The first school was Bethel, second was Media, the next school was Barney Creek. He then went to Cheyenne Valley through 4th to 12th grade. In 1949 he went to Wichita and worked for Montgomery Ward for 2 years. Then came the Korean War and he served in Air Force as a Bombsite Mechanic on the B47 Bomber. He married Loretta Hurt in 1956. In 1954 he took a job as Route Salesman for Wonder Bread and worked for them for 32 years. They were blessed with 3 children. They were members of St. Luke’s United Methodist Church, which became New Hope. He was assistant cubmaster for Coolidge School, director of Weblos Scout Den, and served many offices in church, Chairman of Finance, Financial Secretary, and substitute teacher. In 1987, he contracted Guillain Barre and spent 7 months in the hospital and rehab. While he was in the wheelchair, he took an H&R Block Income Tax basic course. Then he took 2 semesters of Federal Income Tax at Phillips University. He took the IRS test and passed and received his IRS Certificate of Enrollment. He then volunteered in the Volunteer Income Tax Association Program, VITA, for 13 years. He coordinated it for 3 years and received a plaque from the IRS. Jim gave blood regularly to the Red Cross. He gave 14.5 gallons to the blood bank. He received an Inspiration Award from the YMCA, Active Older Adults. Jim was preceded in death by his wife, Loretta, both parents, and 3 sisters, Clara, Louise, and Maxine. He is survived by his 3 children, Janet Schafnitt and husband, Sam, Joyce Elrod and husband, Steve, and Keith Slater, 13 grandchildren, 10 great-grandchildren, 3 brothers, Lewis Slater and wife, Shirley, Gary Slater, and John Slater and wife, Lorna, and sister Irene Astley. In lieu of flowers, donations may be made through the funeral home to New Hope United Methodist Church or Ross Hospice.

Funeral Service for Jim &#8220;Bud&#8221; Slater, 91 of Enid, will be 10:00 AM, Wednesday, May 8, 2019 at New Hope United Methodist Church with Rev. Emily Robnett officiating. Burial will follow in Memorial Park Cemetery with arrangements by... View Obituary & Service Information

The family of Jim "Bud" Slater created this Life Tributes page to make it easy to share your memories.

Send flowers to the Slater family.