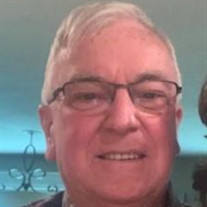 John A. Cain was called home to be with his Lord and Savior on February 24, 2022, after a valiantly fought battle with a long-term illness. John was born on February 23, 1945, to John A. A. and Frances M. Rose Cain, in Enid, Oklahoma. He spent his early childhood years living with his grandparents, on their farm in Garber, Oklahoma. John eventually moved back to Enid, where he graduated from Enid High School in 1963. Shortly after graduation, John joined the Navy and served his country admirably for five years. Most of his military time was served in Japan, but he also served a tour on the USS Oriskany, during the Vietnam campaign. After John’s honorable discharge from the service, he and his family moved back to Enid, where he spent time as a delivery person for Wonder Bread, a salesman for Farmers Insurance, and a machinist with Central Machine and Tool. All of this led up to his 36-year career with the United States Postal Service, where he served as a letter carrier, shop steward, and union president. On August 12, 1987, John married Kim Rothmire, and they began their 35-year journey, sharing the joys and heartaches of life. They became members of Garland Road Baptist Church and continued their love for the Lord and each other. To the end, and regardless of their situation, their love for each other never wavered. After retirement, John enjoyed spending time on his farms, volunteering his time to the Enid High School athletic program, specifically planning fund-raising events with the Grid Iron Club, which raised tens of thousands of dollars for the program. John had a business prowess, that seemed to have the perfect balance of shrewdness and compassion. He operated his business dealings a lot like he lived his life. He believed in common sense, loyalty, and treating others with the level of respect that they earned. Those who truly knew John could never argue the facts that he never met a stranger, he had a huge heart, and he was a generous giver of his time, advice, and resources, especially to those who were in a less fortunate situation. One example of his love for the less fortunate was played out in his daily feedings of the group of feral cats under the overpass. Through all the generosity, love, and compassion, all John ever asked for in return was to be loved. And we did, still do, and will continue to for generations to come! John was preceded in death by his son, James Austin Cain; mother and stepfather Frances and Leo McKee; father, John A.A. Cain; and grand-daughter, Presley Lynn Cain; brother, Rance McKee; in-laws, Jerry and Fran Rothmire; grandmother, Grace Rothmire; great aunt, Marte Scheffler; and extraordinary feline, Oreo. He is survived by the love of his life, Kim; son, John Cain, Jr. and wife Angela; daughter, Kathy Brochu and husband AJ; grandchildren, Braden and Colten Cain, and KaDynce Brochu; sisters, Marilyn Fuxa, Debbie Peterman and husband Ronnie, and Katrina Krupke; brother Koty McKee and wife Debbie; sister-in-law, Robin McKee; brother-in-law, Kent Rothmire; and several nieces and nephews. Visitation will be held on Wednesday, March 02, 2022, from 5:30 – 6:30 PM, at Anderson-Burris Funeral Home. Services for the celebration of John’s life will be held on Thursday, March 03, 2022, at 2:00 PM, at the Garland Road Baptist Church, with Pastor Billy Benson officiating. Memorials may be made to Garland Road Baptist Church or the DAV, through Anderson-Burris Funeral Home.

John A. Cain was called home to be with his Lord and Savior on February 24, 2022, after a valiantly fought battle with a long-term illness. John was born on February 23, 1945, to John A. A. and Frances M. Rose Cain, in Enid, Oklahoma. He spent... View Obituary & Service Information

The family of John Arthur Cain created this Life Tributes page to make it easy to share your memories.

John A. Cain was called home to be with his Lord and Savior on...

Send flowers to the Cain family.