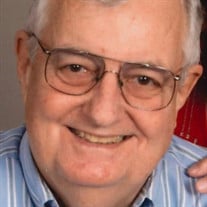 A Celebration of Life service for Jay will be held Friday, Jan. 8, 2021, at 10:00 A.M. in the Anderson-Burris Chapel with Pastor Jerred Unruh officiating. Masks will be required at the Memorial Service. Jay was born in Brooklyn, NY on Oct. 25, 1939, to John E. Merz, Jr. and Dorothy Stella (Derby) Merz. He attended high school in Corning, NY, graduating from Corning Free Academy, and then continued his studies at Pennsylvania State, eventually earning his BA Degree from Florida State and a MA from Webster University. He was commissioned as a Second Lt. in the USAF in 1961, and continued serving his country for 21 years, having a career as a Helicopter Pilot – which he loved. He first flew Missile Site Support in Malmstrom AFB, Montana, eventually using his skills for Rescue work, Drone Mid-Air Recovery, Shipboard Satellite Recovery and Search and Rescue. He loved the helicopter for all it could accomplish. How we have loved seeing the pictures taken in SE Asia, transporting refugees to safety! He served in Vietnam, Cambodia and Laos in 1969-1970. He was the Rescue Detachment Commander for the Southern Commander Rescue Coordination Center in Panama from 1975-1978; finishing his military career as an H-3 Instructor/Chief of Academics at Kirtland AFB, Albuquerque, NM retiring in 1980. Jay loved his country and was so proud to serve. He was awarded many service medals in his career but I believe he was most proud of the “Winged S Award” for life-saving missions flown in a Sikorsky Helicopter. After retiring from the Air Force, Jay began a second career providing support for the Contractors at Vance AFB, including Aircraft Simulators, Community Planner, Civil Engineering, Director of Personnel Services, and Human Resources Manager. He made many friends at the base and enjoyed over 20 years in this capacity, always giving his best to his work. It was important! Jay married Carol Frey in July of 1961 in Enid, OK and they shared over 59 years together, raising four children together, Dana, Susan and John, while living in Panama they adopted a daughter, Rosaura. Jay Merz was known to his family and friends as a man of integrity, and had a kind, gentle, and generous nature. He had a quick wit and knew that a sense of humor could get a person through both the small and large bumps in life. After a 21-year Air Force career, including moves to 10 locations, he brought his family back home to Enid where him and Carol first met. They built a house that would become a home base for their children as well as the next 2 generations. A typical family evening would include sitting on the front porch as the sun set and watching the kids and dogs playing on the front lawn. Jay would be the one timing the foot races around the willow tree, or judging the grandkids’ diving competition in the pool he built. Jay enjoyed giving back to his community as well. He spent many hours volunteering with AMBUCS, Cross Roads Counseling Board, and Hedges Speech and Hearing Board, as both a member and past president for each of these organizations. He, also, served as a member of the City of Enid Zoning and Adjustment Board, Oklahoma State Quality Council Member and Evaluator, and was a member of the American MENSA Society. He enjoyed making things happen, helping others, and seeing results. Jay was preceded in death by his parents and daughter -in- law, Stephanie. Jay is survived by the love of his life, Carol; children, Dana Armstead, Susan Dean (Vic), John Merz, and Rosaura Merz. Sisters, Susan Cook (Peter) and June Clark (Dale), brother-in-law Larry Frey (Jan) and grandchildren Rachel Reese, Austin Reese, Amanda Burris, Aaron Adams, Mark Adams, Halie Adams, Cara Stowers, Audrey Merz, Marthel Ward, Kyra Merz and Tory Merz, six great-grandchildren, and numerous nephews and nieces. Memorials may be made in his name to the Wall of Honor at Woodring Airport or Ministry Essentials International, the ministry of Eric & Staci Frey (www.meintl.org/frey) through Anderson-Burris Funeral Home. The service may be viewed at a later time at www.andersonburris.com on John Merz’s tribute page.

A Celebration of Life service for Jay will be held Friday, Jan. 8, 2021, at 10:00 A.M. in the Anderson-Burris Chapel with Pastor Jerred Unruh officiating. Masks will be required at the Memorial Service. Jay was born in Brooklyn, NY on Oct. 25,... View Obituary & Service Information

The family of John E. (Jay) Merz III created this Life Tributes page to make it easy to share your memories.

A Celebration of Life service for Jay will be held Friday, Jan....