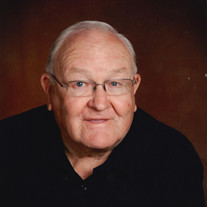 Funeral services for John Postier, 81 of Enid, will be Thursday August 15, 2019 at 2:00 pm in Redeemer Lutheran Church with Pastor Dwayne Schroeder officiating. Burial will follow in Memorial Park Cemetery under the direction of Anderson-Burris Funeral Home. Visitation with the family will be Wednesday evening from 5:30 to 7:00 pm at the funeral home. John was born on March 24, 1938 in Garber, Oklahoma to Clarence John and Sena Gertrude Johnson Postier and died on August 12, 2019 in Enid. He grew up in Garber and graduated from Garber High School. As a young man, he worked for the railroad and as a roughneck in the oilfield. John received his Associates degree from Northern Oklahoma Junior College. He received his B.S. Degree in Education from Central State College. On February 11, 1961, he married Margie Heim in the Immanuel Lutheran Church, Garber. John received his Masters degree in Education Administration and worked toward a doctorate at Oklahoma State University. John taught school in Hennessey and Edmond, the assistant principal at Edmond Memorial Junior High and then the principal of Pioneer-Pleasant Vale. John owned and operated Postier Trucking Company before becoming the environmental services assistant director at St. Mary’s Regional Hospital. John later drove for Groendyke Transport and was an instructor. He received his Million Mile Safety Award, Oklahoma Championship Truck Driving winner and a national finalist in the 2006 national competition. He was a member of Redeemer Lutheran Church and Seasoned Saints. John served on the PPV School Board for 10 years. He was a master self-taught carver. He enjoyed playing cards with family and friends and attending his grandkids activities. John was preceded in death by his wife, Margie on March 29, 2019; his son, Michael, on February 23, 2017; parents; three brothers, CJ, Cecil, and Fred. He is survived by three daughters and their husbands, Lori and Darin Pendleton of Edmond, Melissa and Ron Mainord of Fairview, Melinda and Dwayne McCormick of Ponca City; daughter-in-law, Deirdre Postier of Enid; 8 grandchildren, Kayla (Chad), Nicole, Carter, Claren, Riley, Caden, Madison; brothers, Ervin (Patsy) Postier and Ray Dean Postier; sisters, Ruth Schultz (Bill) Jackson and Clara Marie (Ray) Hasselwander; sister-in-law, Faith Ann Postier; many nieces, nephews, and other relatives. Memorials may be made through the funeral home to Redeemer Lutheran Church Building Fund.

Funeral services for John Postier, 81 of Enid, will be Thursday August 15, 2019 at 2:00 pm in Redeemer Lutheran Church with Pastor Dwayne Schroeder officiating. Burial will follow in Memorial Park Cemetery under the direction of Anderson-Burris... View Obituary & Service Information

The family of John Robert Postier created this Life Tributes page to make it easy to share your memories.

Funeral services for John Postier, 81 of Enid, will be Thursday...

Send flowers to the Postier family.