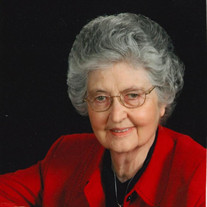 Funeral services for Johnnie McCrate, 90, of Catoosa, formerly of Enid, will be Monday, January 31, 2022 at 2:00 pm in Anderson-Burris Funeral Home Chapel with Bryan Thiessen officiating. Burial will follow in Memorial Park Cemetery. Visitation with the family will be Monday from 12:30 pm to 1:30 pm at AB Circle of Life Event Center. Johnnie was born February 23, 1931 in Amarillo, Texas to John and Ada Simmons Young and died January 26, 2022 in Tulsa, Oklahoma. She grew up in Pampa, Texas and graduated from Pampa High School. On June 12, 1949, she married Phil McCrate in Pampa, where they made their home. They moved to Elk City, Glendive, Montana, and then Seiling following Phil’s job with Shell Oil Company. They moved to Enid in 1995. Johnnie had a custom drapery business for many years. She was active in Elk City Assembly of God Church, Seiling Assembly of God, and later Enid First Assembly, serving as Sunday school teacher for over 20 years. They volunteered with MAPS, which is a volunteer team of RV’ers, working all over the country building churches and assisting with other building projects. Johnnie was preceded in death by her husband, Phil; daughter, Susan Thiessen; brothers, Dean and JD Young; sister, Myrtle Briles. She is survived by her sons and their wives, Mike and Wanda McCrate and Jim and Sharon McCrate; 8 grandchildren and 25 great grandchildren; other relatives and friends. Memorials may be made through Anderson-Burris to Missions in Haiti or Pathway Church.

The family of Johnnie Mae McCrate created this Life Tributes page to make it easy to share your memories.

Send flowers to the McCrate family.