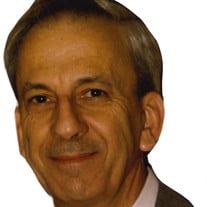 Joseph (Joe) Ciarla, 89, passed away peacefully on November 3, 2020, succumbing to old age complexities. He was born to Italian immigrants Domenic and Maria in October of 1931. Growing up in the New Jersey area he enjoyed an Italian heritage. He served in the Air Force during the Korean Conflict and left the military with the rank of Tech Sargent, having been a Flight-Line Mechanic and trusted leader. While stationed in Enid at Vance AFB, he met and later married Betty McClintock of Enid in December of 1954. After leaving the Air Force he continued to live in Enid, where he remained a civilian worker at VAFB, later coming a Postal Clerk at the Enid Post Office. During his USPS career he obtained the Postmaster position at the Lahoma Post Office, which he held until his retirement. His family grew to 5 children (Waynetta, Cheryl, Janice, Steve and Andy) and over the years grandchildren and great-grandchildren were added. He loved gardening, woodworking, tinkering, creating inlaid wood plaques. He also hand-crafted fishing rods, lures and jigs, along with fly tying. Of his many crafts, his family was his proudest creation. He led a private life but made a difference in the many lives he touched. His family is very grateful when his life was touched by those at Greenbrier Nursing Home. Their care, devotion and kindness helped make his days of old more comforting, especially his last few here on Earth. He is survived by his wife Betty; daughters, Waynetta (Bob) Newsom and Cheryl Beck, sons; Steve (Geri) Ciarla and Andy (Linda) Ciarla. Plus many grandchildren and great-grandchildren. He was preceded in death by his daughter, Janice. At his request, he will be cremated and no services will be held. A private burial will be held at a later date.

Joseph (Joe) Ciarla, 89, passed away peacefully on November 3, 2020, succumbing to old age complexities. He was born to Italian immigrants Domenic and Maria in October of 1931. Growing up in the New Jersey area he enjoyed an Italian heritage. He... View Obituary & Service Information

The family of Joseph Ciarla created this Life Tributes page to make it easy to share your memories.

Send flowers to the Ciarla family.