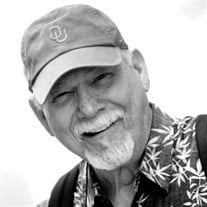 Celebration of Life Service for Mike House, 73 Enid, will be 10:00 a.m. Wednesday, August 4, 2021 in the Anderson-Burris Funeral Home Chapel with Pastor Mark Blakeman officiating. Mike was born July 6, 1948 in Hugo, OK to James and Maggie Roebuck House and passed away Thursday, July 29, 2021 in Enid from complications of Crohn’s Disease. He attended elementary school in Hondo, TX and Hugo, OK, and junior high and high school in Enid, graduating in 1966. He also attended Northwestern at Alva, OK and O.S.U. He married Connie Peters on August 3, 1974 in Enid where they made their home. Mike worked for Pillsbury Mill, Santa Fe R.R, and for O.N.G. where he retired as a senior meter regulator tech. After being retired for a few years, Mike decided he wanted a retirement gig so he went to work for Integris in their warehouse. He was a veteran of the U.S. Navy in the Cold War during the Vietnam era. Mike spent many years enjoying his children and grandchildren by coaching and attending their activities. In addition to his wife Connie, he is survived by his children, Kristin Booth and husband Coy, Sarah Voelzke and husband Brian, Justin House and wife Melody, grandchildren, Austin and wife Shelby Booth, Lexi and Allie Booth, Jake, Emma and Mary Isbell, Jessa Lui, Jeremiah and Joshua House, great-grandchildren, Asher, Adley and Baylor due in October, and a sister, Margaret Riney of Tahlequah. He was preceded in death by his parents. Memorials may be made through the funeral home to Hospice Circle of Love.

The family of Joseph Michael "Mike" House created this Life Tributes page to make it easy to share your memories.

Celebration of Life Service for Mike House, 73 Enid, will be...

Send flowers to the House family.