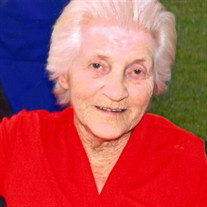 Judith Arline Latchaw, age 82 of Enid, passed away Thursday, December 17, 2020. The graveside service will be at 11:00 AM, Saturday, January 9th in Enid Cemetery. Following will be a reception at the Hoover Building. Cremation arrangements are under the direction of Anderson-Burris Funeral Home & Crematory. Judith was born October 13, 1938 in Enid, OK to LeRoy and Genevieve (Hicks) Watkins. She graduated from Enid High School and married Paul Latchaw on June 3, 1956. They made their home in Enid, where they raised their children and were married 62 years before Paul’s death in 2018. As a girl, Judith was a member of the first Girl Scout Troop in Enid and went on to become a Girl Scout Leader for many years as an adult. She was a professional cook and spent many years working at Enid Central Kitchen and NORCE. She retired from the State of Oklahoma in 2005. Judith lived for her children and grandchildren; all of whom deeply adored her. Her family referred to her as “Grandma Judy” and she was known for her baked beans and holiday stuffing. She was a person of character and moral integrity. Her sense of humor, passion for family, and strong will carried her through life. Above all, Grandma Judy was a person you could count on. She was the best grandmother anyone could ever hope for and she will be greatly missed. Judith was preceded in death by her parents, husband, brother, Jerry and James Watkins, and sister, Jeanette A. Markes Hatfield. She is survived by her son, Daniel Latchaw and grandchildren, Kristen, Daniel, Damyn, and Drew, her daughter, Jennifer Stevens and husband, Douglas and grandchildren, Dustin Stevens and wife, Breanne, Morgan Stevens, Tiffiney Winchester and husband, Jake, as well as 7 great-grandchildren, Gabriel, Brooklyn, Alysia, Gracelynn, Kaitlynn, Alexander, and Jimmy, and a host of nieces and nephews.

Judith Arline Latchaw, age 82 of Enid, passed away Thursday, December 17, 2020. The graveside service will be at 11:00 AM, Saturday, January 9th in Enid Cemetery. Following will be a reception at the Hoover Building. Cremation arrangements... View Obituary & Service Information

The family of Judith Arline Latchaw created this Life Tributes page to make it easy to share your memories.

Send flowers to the Latchaw family.