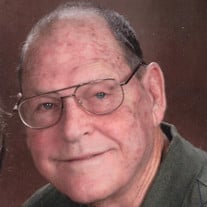 Celebration of Life Service for Kenneth Frech, 75 of Enid, will be Sunday, March 24, 2019 at 2:30 p.m. in Willow View United Methodist Church with Reverend Mark McAdow officiating. Arrangements are under the direction of Anderson-Burris Funeral Home and Crematory. Ken was born on April 4, 1943 in Alva, Oklahoma to Otto and Margaret (Ryel) Frech and went to his Heavenly home on March 20, 2019 in Enid. He grew up on a farm near Helena, Oklahoma. After graduating from Helena High School, Ken attended NWOSU and OSU, where he received a degree in Agriculture Education. He married his wife, Evelyn Taber, on September 19, 1964, and began his career as an Ag teacher in Nash, Oklahoma. After his first year of teaching, Ken was drafted into the military and was honorably discharged two years later. He then returned to being an Ag teacher and continued teaching for eleven years. Ken then retired from education and became an electrician in Grant County and surrounding areas. Throughout a large part of his life, Ken enjoyed spending time volunteering in his community of Wakita, Oklahoma. He was an active member of the Wakita United Methodist Church and the Wakita Lion’s Club. He spent most of his life helping others and spending quality time with his family. Ken is survived by his wife, Evelyn, of Enid; son and his wife, Rich and Mindy Frech of Springfield, Missouri; two daughters and their husbands, Becky and Brian Meyer of Enid, and Cindy and Jeff Johndrow of Pond Creek; brother and his wife, Ron and Mary Frech of New Braunfels, Texas; six grandchildren, Sam and Molly Frech, Rachel (Meyer) and husband, Brady Baugh, Meleah Meyer, Caden and Eli Johndrow; other relatives and friends. He was preceded in death by his parents and two brothers, Dennis and Doug Frech. Memorials may be made through the funeral home to Wakita Lion’s Club.

Celebration of Life Service for Kenneth Frech, 75 of Enid, will be Sunday, March 24, 2019 at 2:30 p.m. in Willow View United Methodist Church with Reverend Mark McAdow officiating. Arrangements are under the direction of Anderson-Burris Funeral... View Obituary & Service Information

The family of Kenneth R. Frech created this Life Tributes page to make it easy to share your memories.

Celebration of Life Service for Kenneth Frech, 75 of Enid, will...

Send flowers to the Frech family.