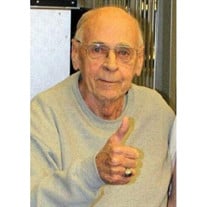 Celebration of Life Service for Kenneth Dean Todd Sr., 83, will be on Monday, December 7, 2020 at 10:00 am in Anderson Burris Funeral Home Chapel with Jack Hayhurst officiating. Burial will follow in Memorial Park Cemetery under the direction of Anderson Burris Funeral Home. Visitation for family and friends will be 5:00 PM to 6:00 PM Sunday at the funeral home. Kenneth was born on December 13, 1936 in Cape Girardeau, Missouri to Earl and Iva Graham Todd and died December 2, 2020 at his home in Enid with his family by his side. During many of his early years, Kenneth worked on his family’s 280 acre farm. He would begin his chores at 4:30 each morning and still have time to catch the school bus at 7:00, plus play basketball before school even began. After graduating high school, Ken enrolled at Texas Christian University, where he quickly realized he was not quite ready for additional studies. In January of 1956 he joined the Army with two of his high school buddies. He was stationed overseas in Germany working in the tank division and thoroughly enjoyed serving his country. On September 11, 1965, Kenneth married Yvonne Willeford in Ft. Worth, Texas. Kenneth had several different jobs before finding his true calling at Tinker Air Force Base. He worked in a donut shop, Frisco Railroad, and Little Giant Pump Company. He completed his Bachelor of Science in Technology Education Degree from Oklahoma State University, while he was working a full time job. He began his career at Tinker Air Force Base repairing injection seats for the B-52. He later became the section chief for the KC-13, branch chief for the B-1, E-3 AWACS, led the birdstrike modification on the B-1, and lastly B-2 Bomber Supervisor. Kenneth was one of the few to receive the highest level in civilian wage grade supervision, WS-19. Kenneth enjoyed woodworking, gardening, sports, a good laugh, family, watching the grandkids play basketball and swim in the pool, and of course, mowing the lawn. He was very particular about his yard and it always looked absolutely spectacular. He was preceded in death by his parents; wife, Yvonne; two sisters, Mary Heeb and Eleanor Smith. Kenneth is survived by his children Kenneth Dean Todd Jr. (Sabrina) of Wagner, Oklahoma and Kathy Vestal (Bill) of Enid; grandchildren Kristin Capps (Joe), Kylee and Kolby Vestal; step grandchildren, Holly Caddell (Josh), Autumn McGowin (Justin); and 5 great grandchildren; two sisters, Earlene Hope and Darlene Dixon; and many wonderful nephews and other relatives. Memorials may be made through Anderson-Burris to OMRF-Cancer Division. Condolences may be made online at www.andersonburris.com

Celebration of Life Service for Kenneth Dean Todd Sr., 83, will be on Monday, December 7, 2020 at 10:00 am in Anderson Burris Funeral Home Chapel with Jack Hayhurst officiating. Burial will follow in Memorial Park Cemetery under the direction... View Obituary & Service Information

The family of Kenneth Dean Todd, Sr. created this Life Tributes page to make it easy to share your memories.

Celebration of Life Service for Kenneth Dean Todd Sr., 83, will...