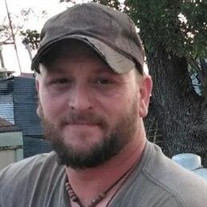 Kristan Aaron Newton was born April 15, 1980, in Ringwood, Oklahoma to Carl and Celeesa Newton. He passed from this life May 3, 2020. He attended Ringwood High School, graduating in 1999. Shortly thereafter he enlisted in the United States Army, where he served for 4 years. During his enlistment he held multiple ranks, achieved several awards and served in various locations including overseas in South Korea. After fulfilling his service in the military, he returned to Ames, Oklahoma, where he would work for the next several years making a home and raising a family. When not in the deer blind, Kristan could be found pursuing his various hobbies which could include anything from drag racing to rebuilding engines, completing his honey-do-list to helping a friend, and anything else that could be done outdoors. Kristan was an avid hunter, fisherman, outdoorsman and patriot. More than that, Kristan was a devoted father, husband, and family man. He loved his country and was proud to have had the opportunity to serve. He was a hard worker and wanted nothing more than to provide for his family. He was mechanically gifted and could fix just about any vehicle you put in front of him, though he might have approached with hesitation if it were a Ford. He was preceded in death by his maternal grandparents, Fenton and Dorothy Beckner, his paternal grandparents, C.A. and Jennie Newton, and his brother, Braden Newton. He is survived by his wife, Monica Newton, of the home, a daughter Lilly, a son Caden, a step-son, Landon, his mother, Celeesa Newton of Enid, his father and step-mother, Carl and Pam Newton, of Aline, a sister, Catessa (Tim and children) Tomlinson of Jenks, two brothers, O’Ryan (Ashley) Newton, of Edmond, and Chadrick (Amanda and Izzy) Newton of Perkins. A viewing will be held for Kristan at the Anderson-Burris Funeral Home in Enid, Oklahoma, from Thursday, May, 7 through Friday, May, 8, where those who wish to pay their last respects will be welcome. A private ceremony will be held for the family at graveside.

Kristan Aaron Newton was born April 15, 1980, in Ringwood, Oklahoma to Carl and Celeesa Newton. He passed from this life May 3, 2020. He attended Ringwood High School, graduating in 1999. Shortly thereafter he enlisted in the United States Army,... View Obituary & Service Information

The family of Kristan Aaron Newton created this Life Tributes page to make it easy to share your memories.

Send flowers to the Newton family.