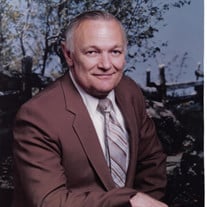 Larry David Janssen, Retired Major United States Air Force, was born April 19, 1932 by Herbert & Edna (Helberg) Janssen. Larry was the 4th of 6 children born to them. It was during the Great Depression. Times were hard, but this family like many others of those days, were hard working, God fearing farmers. Larry was born at home, a bouncing 9lb bundle of joy. He was baptized May 8, 1932 at Breckenridge Lutheran Church, Garfield county, OK, which they attended until they grew up and moved away. The family was truly blessed. Life was centered around God & family. Larry graduated from Garber High School in OK, May 1950. As a teenager Larry & his dad worked the summers wheat harvesting from Oklahoma to North Dakota. He decided that was not how he would achieve his fame & fortune, so he enrolled at Oklahoma A & M, now OSU, in Stillwater, where he joined Farmhouse Fraternity with his brothers Ivan & Arlo. He also joined Advanced Air Force ROTC. Larry (a country boy) met the love of his life, Carol Clark (a city girl) at a dance hour in college. They were married September 5, 1953 in Tulsa while they were still in college. He worked in the chemistry lab. They welcomed their 1st child David in November 1955, then 10 months later they welcomed their 2nd child Diane in September 1956. Larry graduated from college in May 1956, he was always on the honor roll or the dean's list, he wanted that $5 from his parents. $5 was worth something back then. he graduated with a Bio Chemistry degree. Upon graduation he was commissioned in the United States Air Force as a 2nd Lieutenant, where he was selected to become a pilot. (even as a child he was fascinated with airplanes) He went to Stallings AFB in Kinston, NC for pilot training & then to Vance AFB in Enid, OK where he earned his wings in the class of 1958 flying the B-25. Next stop was Norton AFB in San Bernadino, CA where he flew SC47. Then it was off to Naha AFB on Okinawa for a 3 year oversees tour where he flew SA16 Amphibious Rescue missions. Tragedy struck March 14th 1960 when their 2 children, ages 3 & 4 died in an Air Force footlocker while still on Okinawa. In February 1961 they welcomed a daughter, Karen and 11 months later in January 1962 they welcomed a son, Keith, bringing joy & laughter back into their home. Now stationed at McChord AFB in Tacoma, WA Larry was flying C124s & now a Senior pilot & command pilot wing. In 1968 & 69 Larry was deployed to Vietnam, stationed at Bien Hoa (pronounced Wa) Air Base where he flew over 1000 missions in Old Spooky an AC47. He was exposed to agent orange which effects would show up many years later. Upon returning to the states they were transferred to Kelly AFB in San Antonio, TX flying the C124 again for 3yrs taking him all over the world. Then it was back to McChord AFB for 3 years where he flew T39s flying the Generals around. Finally stationed at Barksdale AFB in Shreveport, LA still fling T39s. Larry retired as a Major after 20 years from the Air Force in 1976. Military life was good and rewarding, he LOVED flying. The life experiences & memories of traveling & living in so many places were something we would not change. Larry decided he was not ready to stay retired at 44, he went to work for Royal Airlines, a commuter airline company in Shreveport, LA, which meant he would be home most nights, unlike the military where he could be gone for weeks at a time. He was their Senior pilot where he flew the Beechcraft 99 & Bonderonti, he was also their trainer, scheduler & flight control lead until they closed in 1989. Still not read to call it quits at 57, he moved his family & grandchildren to Albuquerque, NM to work for Ross Aviation until 1997 when he retired for good! Thus, freeing up time for the ever-growing honey-do list and their 3 grandchildren. More sorrow came when their son, Keith, died in Aug of 2011, at 49 years old, leaving another empty spot in their lives. In December 2016 just before Christmas, their 1st great-grandchild, Ryder, was born. He has been a great source of joy for all of us. Their children, grandchildren & now great grandchild have been at least weekly if not a daily part of our lives. Sunday has always been a day for church & family dinners. We joined Legacy Church in June 2001 and have been proud to a part of this church family and all that they do. Larry has always been a wealth of knowledge, providing guidance and teaching moments to help his kids & grandkids navigate for their futures. We could always count on him to be there whether it was a recital or a flat tire. He loved to dance, tell stories & jokes, play games with the kids. He enjoyed traveling & sightseeing, has been to every state west of the Mississippi river & most to the east. His military career led him to every continent except Australia. Larry laid down his book of life November 24, 2020, at 88 years of age, leaving behind his wife Carol of 67 years, daughter Karen Hill, grandchildren Jonathon (Casey) Cottrell, Jennifer (James) Perez & Ryan Hill, great-grandson Ryder Perez and a great-granddaughter Perez still on the way, all of Albuquerque, NM. Brothers Ivan Janssen of Frederiksberg, TX, Arlo (MaryRose) Janssen of Ocala, FL & many nieces & nephews. He was preceded in death by his parents Herb & Edna Janssen, children David, Diane & Keith Janssen, siblings Ivona Janssen, Audrey Janssen & Carobelle Carson. Larry will be greatly missed here on earth, but he has been welcomed in heaven with many cheers. Well done good and faithful servant you have finished the race! Funeral service for Larry Janssen will be 2:00 PM, Saturday, December 5, 2020 at Anderson-Burris Funeral Home Chapel. Burial will follow in Memorial Park Cemetery.

Larry David Janssen, Retired Major United States Air Force, was born April 19, 1932 by Herbert & Edna (Helberg) Janssen. Larry was the 4th of 6 children born to them. It was during the Great Depression. Times were hard, but this family like... View Obituary & Service Information

The family of Larry David Janssen created this Life Tributes page to make it easy to share your memories.

Send flowers to the Janssen family.