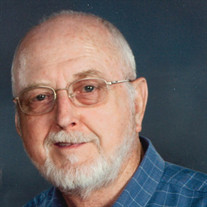 Mass of Christian Burial for Larry E. Morris, 80, Enid, will be Tuesday, February 25, 2020 at noon in St. Francis Xavier Catholic Church with Rev. Mark Mason as celebrant. Recitation of the Rosary will be Monday evening at 6:00 pm in Anderson-Burris Funeral Home Chapel. Private family inurnment will be at a later date in Barrancas National Cemetery in Pensacola, Florida. Larry was born February 20, 1939 in Hastings, Oklahoma to Loyd and Jean Morris and died on February 18, 2020 in Oklahoma City, Oklahoma. He grew up in Hastings and graduated from Hastings High School in 1957. Larry enlisted in the U.S. Navy, October 1957, and served until his retirement in 1976. He worked for Halliburton Services beginning in November 1976 retiring in April 1998. Larry married Sheila McCarthy on October 10, 1979. He was baptized and confirmed at St. Francis Xavier Catholic Church on December 6, 2018. Larry lived through tough times including the death of his infant son, his tour of duty in Vietnam and time away from his family. But he always bounced back. He was a teller of tales and remembered every joke he’d heard since third grade. Larry was a tall, imposing man. He got quite a kick out of his little sister-in-law nicknaming him “BIG L.” He would have enjoyed hearing his last Eucharistic Minister in the hospital sending prayers Heaven ward for Larry, Big L. He was an expert woodworker, crafting furniture and caricature Cowboys, Sailors and Santas. The older he got, the better he got. He seemed to grow in Love and Faith. Larry, you’ve left a large hole in our hearts with your passing. We’ll love you forever, Big L. He was preceded in death by his son, Larry E. Morris Jr.; and parents. He is survived by his wife, Sheila of the home; children, Teresa Flatt and Michael Morris; grandchildren, Melissa, Christine, Michael (Micah), Madison; great grandchildren, Madison, Kevin, Jessica & Michael, Remi, Peyton, Layla; brother, John (Janie) Morris; nieces, nephews, and many friends. Memorials may be made through Anderson-Burris to Our Daily Bread or DAV #66.

Mass of Christian Burial for Larry E. Morris, 80, Enid, will be Tuesday, February 25, 2020 at noon in St. Francis Xavier Catholic Church with Rev. Mark Mason as celebrant. Recitation of the Rosary will be Monday evening at 6:00 pm in Anderson-Burris... View Obituary & Service Information

The family of Larry Eugene Morris created this Life Tributes page to make it easy to share your memories.

Send flowers to the Morris family.