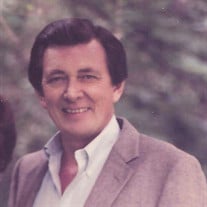 The funeral service for Lawrence Smith, 81, Enid, is at 2:00 PM Saturday, March 9th 2019, at Anderson-Burris Funeral Home Chapel in Enid. Burial follows in the Hennessey, Ok Cemetery. Known by friends and family as Smiley or Smitty; he was born to Lillie Tharp and Arlie Newton Smith, March 17, 1937, in Konawa, Ok and passed away March 4th 2019 in Oklahoma City following a brief illness. Frequent visits and rides home for a young girl named Joan (Joni) Swindell, in Lindsay, Oklahoma at a local soda fountain led to a lifelong romance of 61 years. Happily married and moving with two small children they made their home in Perry, Ok. The family with his stability and understated guidance flourished with friends and community. The couple later moved to Enid, Ok where they made deep roots with friends and community Smiley was a truly wonderful husband, father, brother and friend that exemplified decency and kindness to all that knew him. He worked SJL Well Service in Hennessey for many years until he retired at age 72. His interests were family, friends and the love of music. His love of music may have been inspired by winning a singing contest as a youngster sponsored by a Country star named “Cowboy Copus” in the 1940’s. Being a heckuva guitar player and singer he played in different music groups throughout the years. His time performing with Jim Edgar and the Roadrunners was particularly enjoyable while playing many music venues throughout Oklahoma. He is survived by two children, Marty Smith and wife Jeanie of Eufaula, Julie Smith Adams and husband Daniel of Oklahoma City; four grandchildren, Tad and Martina Smith of Oklahoma City, Ok, Haley Smith Lipkin and husband Jack of Roseburg, Ore., Beau Adams, Christopher Adams of Tulsa, Ok, two great-grandchildren; two brothers, Darrel Duggan and Ray Barrett of Baytown, Tx and sister, Ruby Demers of Waterbury, Ct. Smiley was preceded in death by his wife Francis Joan (Joni) Smith and his mother Lillie Ramming. In lieu of flowers, the family requests memorials be made Physicians Choice Hospice. Condolences may be made online at www.andersonburris.com.

The funeral service for Lawrence Smith, 81, Enid, is at 2:00 PM Saturday, March 9th 2019, at Anderson-Burris Funeral Home Chapel in Enid. Burial follows in the Hennessey, Ok Cemetery. Known by friends and family as Smiley or Smitty; he was born... View Obituary & Service Information

The family of Lawrence W. "Smitty" Smith created this Life Tributes page to make it easy to share your memories.