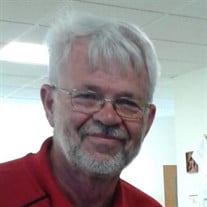 Celebration of Life Service for Leslie Grimm, 72 of Tonkawa, will be Saturday, June 19, 2021, at 1:00 p.m. in Anderson-Burris Funeral Home Chapel. Cremation will follow the service. At 11:32 Friday night, June 11, 2021, Leslie turned in his change of address form from his earthly home to his heavenly home, a house not made with hands, eternal in the heaven. Leslie Gilbert Grimm was born March 6, 1949, in Eureka, Kansas to Chester and Ruth (Pape) Grimm and joined older brother Allen. In 1951, the family moved to Tonkawa, Oklahoma, where they made their home in the old Prisoner of War Camp. Two sisters were born after the family moved to Tonkawa. Les attended school from kindergarten through High School in Tonkawa and 3 semesters at Northern Oklahoma College. He went on to attend Oklahoma State University graduating with a BS in Science. Les then attended Southwestern Baptist Theological Seminary in Fort Worth, Texas, earning a Masters in Religious Education. He continued to take many college classes to further his learning. For the next 37 years, Leslie dedicated his life to teaching math, science, Bible and computer to Junior and Senior High School students in Christian Schools in Alabama, Texas, Oklahoma, and Kansas. He taught 16 years at Oklahoma Bible Academy in Enid. His passion was to bring his students to a fuller understanding of the Lord in their lives. After retiring, he and Lou returned to Tonkawa and he taught at Northern Oklahoma College as an adjunct professor in the physics department and taught physic labs. He was awarded the Adjunct Teacher of the year. On August 24, 1968, Les married his high school sweetheart, Lou Ellen Zehner. Les and Lou Ellen had two sons, Wade Russell Grimm born in 1980 and Kyle Andrew Grimm born in 1986. Leslie was a self-made man of many traits. He was an excellent carpenter, refinishing several houses which they then made their home. During his teen years, he along with his brother, Allen, and his dad disassembled old houses and used the wood for their church or sold it for money to complete their project. He was very knowledgeable with computers and their inner workings. God placed a man in Les’ life that needed help organizing his barn. Before long Les had torn apart an old pickup and put it back in running order and then he went on to do home repairs in the house. The last five summers were spent in the high plains country of Colorado on a cattle ranch. Les helped with the cattle, remodeled the old ranch house into an Airbnb, refinished furniture he found in the barn and was always checking, fixing and moving irrigation water. Les and Lou also were grave walkers and delighted in finding relatives gravestones. They documented and photographed them for submission to Find-A-Grave websight. A special hobby of his was astronomy. He loved looking through his telescope especially in the dark sky of Colorado. Leslie was preceded in death by his parents, Chester A and Ruth Pape Grimm. He is survived by his wife of 52 years, Lou Ellen; son and wife, Wade and Amanda Grimm, their children, Hunter, Brayden, Jaxon, Zayden, Emma and Victoria of Fort Walton Beach, Florida; son, Kyle Grimm and Becca of Chickasha, their children, Kayleigh Grimm and Kelsi Campbell of Enid, and Emrie Grimm of Chickasha; brother and wife, Allen and Beverly Grimm; sisters and husbands, DeAnne and Jimmie Wall, Mariam and Bill Corbett; brother-in-law, Oren and wife Patricia Zehner; nine nieces and nephews. Leslie was of the Lutheran faith attending Country Church, west of Newkirk. He will be interred in the Lamont Cemetery at a later date. Memorials may be made through Anderson-Burris to St. John’s Lutheran Country Church.

The family of Leslie Gilbert Grimm created this Life Tributes page to make it easy to share your memories.

Celebration of Life Service for Leslie Grimm, 72 of Tonkawa,...

Send flowers to the Grimm family.