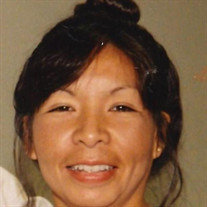 Linda Gayle Momsen was called home to be with her Lord and Savior on April 26, 2021 while surrounded by her family. A lifetime Oklahoman, Linda was born on January 11, 1968 in Claremore, and was raised in Sapulpa and Sand Springs. In 1984, Linda met her soul mate and best friend, Wayne, and they were married in October of that year. Shortly after, they made their home in Enid, OK, and had two children. Linda truly possessed the heart of a caretaker, and found inherent joy in taking care of the sick, the elderly, and her family and friends. Some of Linda’s favorite activities revolved around her loved ones. She enjoyed family vacations, motorcycle rides, and family gatherings and barbeques. She especially enjoyed spending time at the lake house, and watching her grandchildren play various sports. With her children grown, Linda formed a very close and special bond with her loyal companion and fur baby, Jade. Linda leaves behind many who loved her dearly, including her husband, Wayne, of the home, son Dariel Momsen of Enid, with his wife, Brittany Momsen, and daughter, Gabrielle. She is also survived by her daughter, Amy Momsen, of Dumas, Arkansas, with children Jackson and Lily, as well as Jackson and Lily’s father, Jack Dickson. Linda is also survived by her two sisters, Sharon Whitehead of Sapulpa, OK, and husband Steve Whitehead, and Karen Hans of Tulsa, OK, as well as Linda’s two brothers, Michael Cooper of Tulsa, OK, and Terry Cooper with wife Jeanetta. Numerous nieces and nephews and great nieces and nephews. Linda is preceded in death by her parents Ben and Alice Cooper, brothers Ben Cooper and Eugene Jack Cooper. Linda was a beautiful soul who will be sorely missed, though we take solace in the fact that she now rests peacefully in the arms of her Savior. Celebration of life service for Linda Momsen will be 10:00AM, Friday, April 30, 2021 at Anderson-Burris Funeral Home Chapel with burial to follow in Memorial Park Cemetery. Visitation for family and friends will be Thursday evening from 5:30 to 6:30 at Anderson-Burris.

Linda Gayle Momsen was called home to be with her Lord and Savior on April 26, 2021 while surrounded by her family. A lifetime Oklahoman, Linda was born on January 11, 1968 in Claremore, and was raised in Sapulpa and Sand Springs. In 1984, Linda... View Obituary & Service Information

The family of Linda Gayle Momsen created this Life Tributes page to make it easy to share your memories.

Linda Gayle Momsen was called home to be with her Lord and Savior...

Send flowers to the Momsen family.