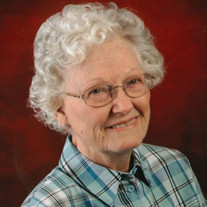 Funeral service for Loretta Dunaway, 94, of Enid, will be 10:00 a.m. Saturday, July 13, 2019, at the Anderson-Burris Funeral Home Chapel, with Rev. Gail Edmison officiating. Burial will follow in Enid Cemetery, with arrangements by Anderson-Burris Funeral Home & Crematory. Loretta was born on March 8, 1925 in Cushing, Oklahoma to Charles Wesley and Grace (Wood) Clark, and passed away on Wednesday, July 10, 2019 in Enid. Loretta married Jess Alford Bartley in June 1941, and they had four children. She married James A. Dunaway in April of 1966. Loretta worked as a nurses aide for four years, then as ward clerk at St. Mary’s Hospital. Her favorite past time was dancing with the Golden Swingers, crocheting, and quilting. Loretta is survived by her children, Lois Smith (Jack) of Enid, Charles Bartley (Myrna) of El Reno, Joe Bartley (Elizabeth) of Colorado, and Benny Bartley (Sharon) of Sand Springs; 8 grandchildren; 8 great grandchildren; and 5 great great grandchildren; 1 brother Vernon Clark of California. She was preceded in death by both husbands, and 3 brothers Charles Jr., Ben, and Marvin, and 1 sister, Irene. Memorials may be made through Anderson-Burris to Hospice Circle of Love.

The family of Loretta Mae Dunaway created this Life Tributes page to make it easy to share your memories.

Send flowers to the Dunaway family.