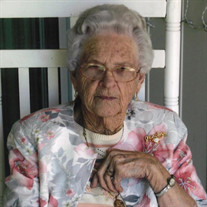 Lucille Champ, 103-year-old Woodward resident, died on August 6, 2020. Services will be held at the Ft Supply Baptist Church on August 29th at 11am. Burial at the Fargo Cemetery will follow for the immediate family only. Arrangements are under the direction of Anderson-Burris Funeral Home and Crematory, Enid, OK. Alma Lucille (Atkinson) Wisner Champ was born on December 10, 1916 on a farm near Fargo, Ok to Lyle and Edith (Dodson) Atkinson. Lucille was raised on the farm with her six sisters; Reva, Katherine, Thelma, Mary Margaret, Fay and Betty and her four brothers; Buster, Bud Leon and Keith. She began her schooling at Greenwood, a small country school in Ellis County. Later she attended Fargo High School. She was united in marriage to Herschel Wisner on February 16, 1935 at the First Baptist Church in Woodward. They were blessed with four children, Gene, Laveta, Phillys and Thurlene. They made their home on the farm south of Ft. Supply and had 32 happy years together. During those years, Lucille stayed very busy raising her four children, as well as, working in the kitchen at Western State Hospital and later at Ft. Supply Public Schools. Following the passing of Herschel, Lucille later married Raymond Champ. She and Raymond enjoyed traveling in their RV to Colorado to go camping with all of their friends. Lucille was also a member of TOPS and took many trips with her friends from the club. She was a member of the Fairview Baptist Church and when that church disbanded she moved her membership to the Ft. Supple Baptist Church and was a faithful member there until her passing. She kept the nursery for many years with her good friends, Luella Gartrell and Nellie Alexander, and helped with all of the funeral dinners. Lucille was recognized at Ft. Supply Baptist Church’s 50th Anniversary Celebration as the oldest member of the church. She was also a member of the Oklahoma Centenarian Society, which is a club for Oklahomans who have reached 100 years of age or older. Lucille loved to play cards and board games. She especially loved to play Parcheesi with her daughters. She also loved to fish and loved spending time with her family. She always looked forward to all holidays so she could invite everyone to her home for a big dinner and a time of fellowship with each other. Lucille is survived by her daughters Laveta Owens and her husband Ronnie of Woodward, OK Thurlene Davis of Harrah, OK and step-daughter Naida Linnabery of Granbury, TX. She is also survived by 10 grandchildren, 2 step-grandchildren, 16 great-grandchildren, 2 step-great grandchildren, 11 great-great grandchildren, her sister Faye Purvis of Beulah, CO, her brother Keith Atkinson of Florence, CO and many nephews, nieces and friends. She was preceded in death by her parents, her husbands, Herschel and Raymond, her son Gene Wisner and her daughter Phillys Holloway. Memorials may be made to the Ft. Supply Baptist Church.

Lucille Champ, 103-year-old Woodward resident, died on August 6, 2020. Services will be held at the Ft Supply Baptist Church on August 29th at 11am. Burial at the Fargo Cemetery will follow for the immediate family only. Arrangements are... View Obituary & Service Information

The family of Lucille Wisner Champ created this Life Tributes page to make it easy to share your memories.

Send flowers to the Champ family.