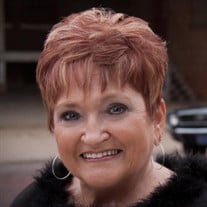 Memorial service for Lucy Ella Hess, 79 of Enid, will be held at 2:00 PM Wednesday, September 4, 2019, in the Anderson-Burris Funeral Home Chapel with Joe Akin officiating. Cremation arrangements are under the direction of Anderson-Burris Funeral Home and Crematory. Lucy was born February 28, 1940, in Fayetteville, NC, to Leo and Annie Averitt, and passed away Saturday, August 31, 2019, surrounded by her family at her home in Enid. Lucy graduated from Fayetteville High School in 1958. After high school she attended nursing school. She would also meet and marry Bill Leigh. Soon thereafter they would move to Ponca City, OK. There they would have their first child a daughter(Julie) Oct 8, 1960 and a son (Bill) Jan 5, 1962. Moving the family to Enid in 1962 where a short time later they would have their second son (Jon) Mar 3, 1963. In 1968 Lucy and Bill Leigh would separate, and in 1969 would divorce. Lucy was never afraid of working hard. And when she came to Enid, she went to work at the Enid public library and with Serv Air at Vance Air Force Base in the record keeping department. On June 5, 1969, she married Jim Hess to whom she would be married for the next 50 years. Jim and Lucy have one daughter Brandi Oct 8, 1975. In 1977 they moved to Velma, OK. Where she would resume her passion and returned to nursing as a nurses aid. Lucy worked as a nurse’s aid until she finally pursued her lifelong dream of being a nurse and attended Red River Area Vo-Tech in Duncan and earned her license as an LPN in 1978. She began her career working at St. Mary’s in 1979. Lucy then attended NOC in Tonkawa and graduated May 4,1991 at the age of 51 with honors and as the vice president of her class she earned the degree necessary to become a registered nurse. As an RN, she served as a surgery nurse at Enid Memorial/Regional Hospital, in which she earned the respect of doctors, nurses and patients alike. She opened the Office for Quality Lifestyles Home Health one of the first home healthcares in Enid. In 1995 She became the Director of Nursing for Greenbrier Assisted Living and was an example of what being a professional nurse was. She not only knew her staff, she knew her residents. She knew their names, their needs and their families. Lucy was a nurse among nurses and even taught MAT classes at Autry Vo Tech to help others begin the journey she herself had started. In 2007 she would leave Greenbrier and would become a long-term care facility surveyor for the State of Oklahoma and was recognized as a fierce defender of resident care and staff training for three years. She would return to Greenbrier as director of nursing for the nursing home until she retired in 2011. Lucy was a Christian and attended church all of her life. She loved Jesus and she loved to worship. She worked with youth groups and because she loved so many who were in band with Brandi she became a band mom. And because she was a nurse, she became their personal band aid. Lucy was a member of Calvary Baptist Church. Lucy was a very creative person making beautiful bows and she loved to crochet. Other hobbies included retail therapy, reading and watching Westerns with Jim. Lucy also loved shoes and had quite a collection at one time. She also loved to travel and go places with her family. She also might have had a small crush on Neil Diamond and George Strait but Jim didn’t seem to mind because she loved him more. Lucy loved Halloween. She loved to dress up and organize Halloween events for her work, friends and family. Plus she really loved dressing up as a jester which really fit her personality. Lucy loved all the holidays! The holidays were her time to decorate and spend time with her loved ones. She loved to cook for her family and they loved to eat her cooking. In addition to her husband Jim, Lucy is survived by her children, Julie Ward and husband Bob of Vian, Bill Leigh of Tahlequah, and Jon Leigh and wife Lanea of Sallisaw, Brandi Akin and husband Joe of Enid and an honorary daughter Gayla Crum of Enid eight grandchildren(Tresha, Lacie, Alix, Wes, Hope, Billy, Amanda and Mackenzie). And eleven great-grandchildren(Emily, Cash, Her name sake Lucy, Hollis, Kingston, Mattox, Claire, Tori, Kori, Bricelynn and Porter). She was preceded in death by her parents, The father of three of her children and her grandson, Sam Akin. Memorials may be made through the funeral home to St. Paul’s Lutheran School.

The family of Lucy Ella Hess created this Life Tributes page to make it easy to share your memories.

Memorial service for Lucy Ella Hess, 79 of Enid, will be held...

Send flowers to the Hess family.