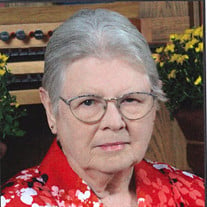 Margaret Ann Clark - Hunter, of Enid, Oklahoma passed peacefully at home after a brief illness on Tuesday, August 20th. With her during hospice was her devoted son, faithful friend Christina Falley and loving Schnauzer Shotzie . Margaret was 85 years old. Memorial services will be held at 11:00 a.m. Saturday, September 21st, 2019, at St. Matthew’s Episcopal Church in Enid under the direction of Anderson-Burris Funeral Home. The Reverend Dr. John Forest Toles will officiate. Family interment will directly take place at the St. Matthew’s Episcopal Church Memorial Columbarium. The daughter of James Lowell Clark and Mary Sue (Morgan) Clark, Margaret was born July 3rd, 1934, in Augusta, Oklahoma. She later grew up on her family’s Land Run farm in the Carmen, Oklahoma area where she attended school. Margaret was an accomplished women’s basketball player graduating with the class of 1952 from Carmen High School. Horseback riding was a daily devotion for her. She attended Northwestern State College in Alva, Oklahoma where she graduated with a Bachelor of Arts degree in History in 1955. Margaret quickly entered the field of teaching high school. She later pursued a Master of Science Degree in Education in 1967 from Emporia State Teachers College Emporia, Kansas transitioning to elementary grades thereafter. Further educational Post Graduate work was completed at Washburn University in Topeka, Kansas. She was a member of the Kansas Teachers Association. Margaret served as an Elementary, Junior High and High School Teacher in the Public School System for 41 years in the states of Arizona, California, Kansas, and Texas until her retirement in 1996. Prior to retirement as a teacher in 1986 Margaret developed a new interest as a Sales Professional for the J.C. Penney Company in the Drapery and Window Treatments Department. Her 10 year second career brought her yearly top store and regional sales awards during her positions at 4 different J.C. Penney store locations in Kansas and Texas. Margaret had three lifelong priorities which were her health, her family and her home. Her generous kind and quiet caring nature as a Mother and Wife were a gift that will be sadly missed. She was a proud Parish member of St. Matthew’s Episcopal Church. An avid gardener who enjoyed tending her Chrysanthemum, Iris and Peony bed’s in her yard as many months of the year as the weather would allow. Margaret was an animal lover, admirer of nature and especially of wild birds. In recent years she had grown fond of feeding and nurturing a yearly returning flock of Orioles in her backyard. She enjoyed, with her late husband John, watching wildlife feeding in their backyard, learning about trees along with other plants, and various points of interest in nature. A voracious reader Margaret greatly enjoyed reading mystery books, watching old movies on TCM and keeping up with her favorite Sunday evening PBS programming. Margaret married John Robert “Red” Hunter in Alva, Oklahoma on December 27th, 1954. She is survived by son, Michael Alan Hunter of Enid, Oklahoma, brother-in-law’s Barger Hunter of Kingston, Oklahoma, Joe Hunter and wife Carolyn of Sharon, Kansas, Dean Hunter of Wichita, Don Griffith of Enid, Oklahoma along with many nieces, nephews, and many beloved cousins. She was preceded in death by her parents, her husband John Robert Hunter and her sister Vicki Louise Clark - Griffith. In lieu of flowers a memorial contribution may be made in her memory to the Margaret A. Hunter Education Fund at Leonardo’s Children’s Museum or Circle of Love Hospice sent in care of Anderson-Burris Funeral Home, 3002 North Van Buren, Enid, Oklahoma 73703

The family of Margaret Ann Clark-Hunter created this Life Tributes page to make it easy to share your memories.

Send flowers to the Clark-Hunter family.