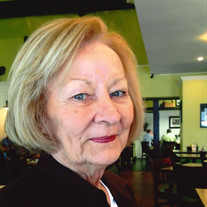 On Saturday, January 23, 2021, Marilyn D. Austbo passed away peacefully in her home at the age of 81. Marilyn, born February 9, 1939 to Vernon and Gladys Reid, was the oldest of five children raised on a farm north of Nash, Oklahoma. After graduating from Nash High School in 1957, Marilyn moved to Enid to attend college. After college, Marilyn started her career at Champlin Refinery, moved to 101 Energy upon closure of the refinery, and finished her career working for the Department of Defense at Vance Air Force Base. During her career, Marilyn was active in several professional organizations. On July 2, 1960, Marilyn married Larry Austbo and made their home in Enid, Oklahoma. They raised one son, Lance, and two daughters, Kimberly and Melinda. This past July, Larry and Marilyn celebrated their 60th wedding anniversary. After an early retirement, Marilyn enjoyed creating beautiful flower gardens, bird watching, her pets, iced tea on the patio with her friends, and traveling with her sisters. Most of all, Marilyn enjoyed spending time with her children and grandchildren. Marilyn is preceded in death by her parents. Marilyn is survived by her husband Larry; her son Lance and wife Connie; daughter Kimberly Massaro and grandchildren Nathan and Anna; daughter Melinda Horner and husband Tony, and grandsons Max and Merritt. In addition, Marilyn is survived by sisters Janice Jones and husband Larry, Lenita Hockersmith and husband Benny, Dr. Cheryl Reid, brother Lynden Reid and wife Peggy, and numerous nieces and nephews. Marilyn suffered from Alzheimer’s disease for many years and the family owes a debt of gratitude to her loving caregivers that assisted her while remaining in her home. Due to COVID-19, a private family service will be held. Memorials may be made through Anderson-Burris to Hospice Circle of Love, or OMRF-Alzheimer’s Division.

On Saturday, January 23, 2021, Marilyn D. Austbo passed away peacefully in her home at the age of 81. Marilyn, born February 9, 1939 to Vernon and Gladys Reid, was the oldest of five children raised on a farm north of Nash, Oklahoma. After... View Obituary & Service Information

The family of Marilyn Darlene Austbo created this Life Tributes page to make it easy to share your memories.

Send flowers to the Austbo family.