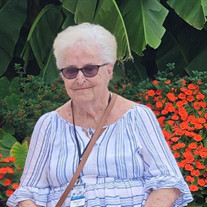 Funeral services for Marilyn Kay Hail, 77 of Hennessey, will be Monday, February 28,2022 at 11:00 am at the First Christian Church, Hennessey, with Reverend Ish Engle officiating. Burial will follow in Hennessey Cemetery under the direction of Anderson- Burris Funeral Home and Crematory, Enid, Oklahoma. Marilyn was born on May 7, 1944, in Oklahoma City to Alice J. Risher and died on February 21,2022 in Enid, Oklahoma. Marilyn graduated from Del City High School. On January 30, 1962, she married her husband William “Bill” Hail in Del City, Oklahoma. They moved from Oklahoma to California where they established life and raised their three children, Rhonda, Brute and Sherri. Marilyn was a pillar of strength for her family, a true matriarch. She showered everyone she came across with love and amazing grace, even when it was difficult. She enjoyed spending time with her family and friends, working on puzzles, as well as crocheting but she hated knitting. She was known for her wonderful sense of humor and straight forward advice that always made you grateful you sought it out. Marilyn was an incredible cook, teaching her children and grandchildren all the secrets, tips and tricks even if they could never master the recipe the way she did, especially fried chicken. Marilyn was an adventurer at heart and her love for travel never wavered. Her adventurous spirit allowed her to see most of the United States including Hawaii as well as traveling internationally to Jamaica. She had an affinity for collecting anything and everything that caught her eye and loved to share her little treasure. Her kindness and generosity stretched further than her family, it included the tenants of her rental properties in the Hennessey community, which allowed many of them to become homeowners. Marilyn is preceded in death by her parents, Husband William Robert Hail, son William Robert Hail Jr, and grandson William Robert Hail III. Marilyn is survived by her daughters Rhonda Hail of Hennessey; Sherri and husband Steve Lee of Enid; seven grandchildren; nine great grandchildren; Her two brothers Ron and Conrad Lightfoot; her sister Sheila Lightfoot; numerous nieces, nephews, other relatives and many friends.

Funeral services for Marilyn Kay Hail, 77 of Hennessey, will be Monday, February 28,2022 at 11:00 am at the First Christian Church, Hennessey, with Reverend Ish Engle officiating. Burial will follow in Hennessey Cemetery under the direction... View Obituary & Service Information

The family of Marilyn Kay Hail created this Life Tributes page to make it easy to share your memories.

Funeral services for Marilyn Kay Hail, 77 of Hennessey, will...

Send flowers to the Hail family.