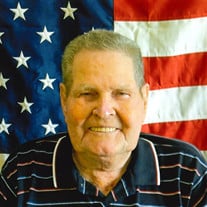 A celebration of life for Marion E. Batterman will be 1:30PM, Wednesday, August 21, 2019 at Central Christian Church, 1111 W. Broadway, with Rev. Tom Stanley, and Rev. Don Johnson officiating. Arrangements are by Anderson-Burris Funeral Home & Crematory. Marion Batterman was born October 11, 1924 and joined his Heavenly Father on August 17, 2019 at the age of 94. He was born to John and Edith Batterman on their farm near Guymon. He was a twin and the 7th child of 10 in his family. He married Delcea Hart on February 3, 1942 and began farming. A little over a year later their first child was born and when she was 6 months old, Marion was called to serve in the Army, E Troop, 7th Cavalry. Thereafter, he was deployed to the Asiatic-Pacific during WWII. He was stationed in Okinawa, Iwo Jima, Guam, the Philippines and then marched into Tokyo as a part of General McArthur’s honor guard for the Japan’s surrender. Upon his honorable discharged he returned home and began farming in Towner, Colorado. Around that time he heard God’s call, so sold the farm and moved to Texas to attend college before becoming a minister. With his wife by his side and now 3 children, he moved to pastor a country church near Campo, Colorado. Later they moved to pastor a church in Fairview, Oklahoma. The family moved in 1954 to Enid and he pastored a church in Marshall, Oklahoma until 1958. During that time he was employed at Pillsbury Mills then Evans Cut-Rite Drug Store. In 1972d he and Delcea purchased the Q Spot Family Recreation Center and operated it for 15 years before retiring. During that time, he ministered to many young people who later returned to tell him how he influenced their lives. His ministry never stopped. They were members of Central Christian Church where he served as a substitute Sunday School Teacher in the Sooner Class. He became a Deacon, and Elder, then an Elder Emeritus. He and Delcea were active with the Centurers and traveled extensively. In 2011 Marion and Delcea moved to Burgundy Place senior living apartments. They enjoyed several years there until health required them to move on to Greenbrier Assisted Living then to Greenbrier Residential Village, where he lived until his passing. He enjoyed puzzling, bingo, and other activities, with friends there. His children joined him often to puzzle, which rendered many hours of fun and laughter. Golfing and fishing were his hobbies and he continued until March 2016. He and his son, Marvin spent endless hours golfing and fishing. He donated blood to the Northwest Blood Institute until age 90 and donated a total of 23 gallons. He was always a giving and caring man, who dearly loved his wife and children. He and mom, through their lives, left a priceless legacy to their children and grandchildren. Through their example, we developed a strong faith and love of God and family. We feel blessed to have had such wonderful parents. Recently Dad said “A kind word can change lives” and he lived that daily. Surviving him are his children Eilene Crites, Marvin and Cheryl Batterman, Enid, and Glenda and Bill Martell, Shawnee. His 9 grandchildren are Angela and Bill Bunch, Anita Milam, Alex Crites, Aaron Crites, Russell and Angel Hobbs, Heidi and Eric Fisher, and Barry and Tara Batterman. He had many great and great-great grandchildren who also hold wonderful memories of him. Marion also leaves a sister-in-law Alice Batterman and many nieces and nephews. Preceding him in death were Delcea his beloved wife of 73 years, his parents,7 brothers, 2 sisters, his son-in-law, dear friend Chuck Crites, and grandsons Neal and Alan Crites. In lieu of flowers donations may be made to Central Christian Church Legacy Endowment Fund. Thank you to the Caregivers of Central Christian Church and Hospice Circle of Love. Our heartfelt gratitude to Greenbrier Village for their 8 years of such loving care that he called it his home.

The family of Marion E. Batterman created this Life Tributes page to make it easy to share your memories.

A celebration of life for Marion E. Batterman will be 1:30PM,...

Send flowers to the Batterman family.